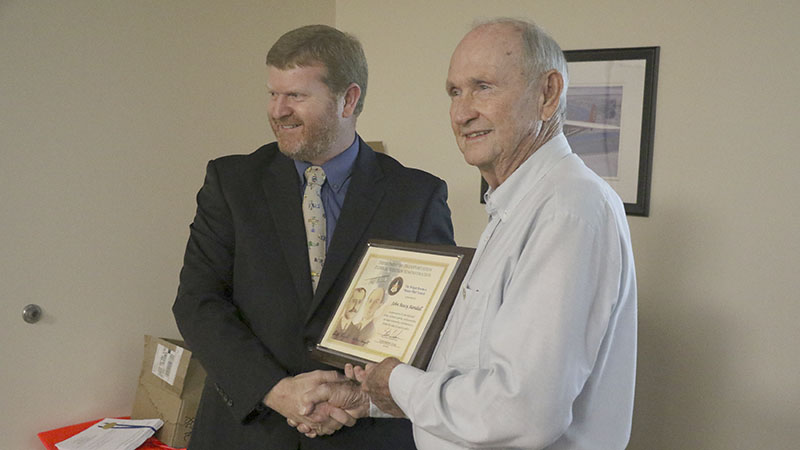 A pilot who has been keeping his plane at the Picayune Municipal Airport for more than 10 years was issued the Wright Brothers Master Pilot Award last week.

According to a power point presentation by William Scott Lynn, FAA Safety Team program manager, Randall is a graduate of Greenwood High School in 1954, John Reecy Randall has been a pilot since the 1950’s, starting out on the Piper J5 in 1956. He volunteered to join the U.S. Army in 1957 where he learned to maintain aircraft at the Army Aircraft Maintenance School in Alabama.

In 1961 he was selected for the Army’s helicopter flight school.

After receiving heavy helicopter training at Fort Rucker, he was sent to Bad Kreuznach, Germany.

Not only is he a veteran, Randall is also an accomplished pilot who has received nearly every certification the Federal Aviation Administration offers.

He also served in the Vietnam war in 1965 with the 128th Assault Helicopter Company in Phu Loi, Vietnam.

His time with the military came to a close at the end of that same year and he then moved into the private sector, at first working for Standard Oil Company in August of 1966.

During Randall’s time with the oil company, he test flew helicopters that had just been repaired, became the manager of the aviation department at Lakefront, La. in 1983, and was quickly promoted to aviation manager for all of Chevron two years later.

During his many years as a pilot, he has achieved FAA certifications in airplane flight instruction, airplane maintenance, airframe and powerplant mechanic, private and commercial glider pilot, helicopter pilot and many others.

On Nov. 21, Randall was presented with the Wright Brothers Master Pilot Award before a crowd of friends and family at the local airport by William Scott Lynn, FAA Safety Team program manager. The award also came with a Blue Ribbon Package that includes all of the paperwork and records the FAA had on Randall at that time.

He is currently a resident of Pearl River, La., but has been keeping his plane, which he still flies, at the Picayune Airport because he likes it better than the Slidell, La. airport.

Of all of the aircraft he has flown, his favorite is the Cessna 180. He still flies at least weekly.