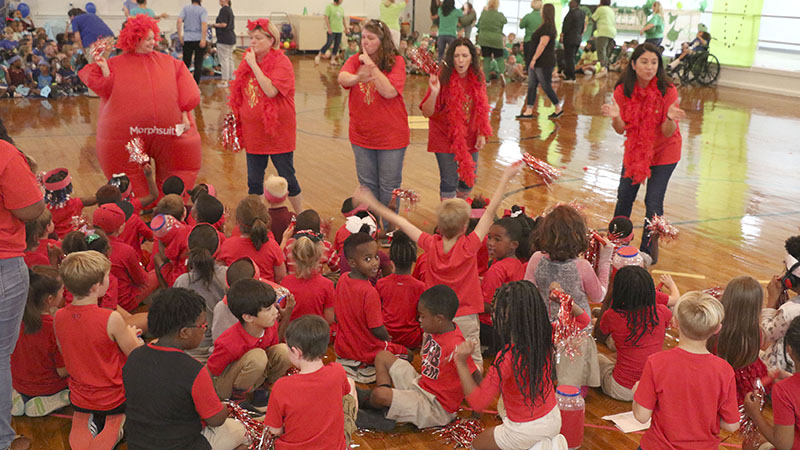 TEAM EFFORT: Staff and students who are part of the Red Phoenixes participate in a pep rally at South Side Lower Elementary to kick of the school’s new Positive Behavior Incentive System. Photo by Jeremy Pittari

Friday afternoon children attending South Side Lower Elementary gathered in the gymnasium, each wearing shirts of one of four colors, as they participated in a pep rally.

A cacophony of chants from the children and their teachers filled the room as they each cheered for their respective team color before the teachers of each team participated in a team-based competition.

Principal Christie Pinero said the pep rally was the school’s kickoff for a new program, called the Positive Behavior Incentive System. It’s being funded with a grant the school received last year and aims to reinforce good behavior instead of calling attention to a child’s bad behavior. An example would be if a student spoke out of turn in class; instead of correcting the child and drawing attention to the negative behavior, teachers will instead reinforce the positive act of raising their hand before speaking or asking a question, Pinero said.

As the students prepared for the pep rally this week, they engaged in a week of dress up days according to a different theme. One day had the students wearing pajamas to school, while on another day they got to dress up as their favorite character. Each day they came to school dressed up in the corresponding theme, they got a point. The team with the most points at the end of the week will get popsicles during an extra recess, Pinero said. Ultimately, the program promotes not only good behavior, but also sportsmanship and good spirit, she said.

Each team also got to pick out a mascot, all with bird themes.

As the year progresses, rewards will change. Pinero said other schools in the Picayune School District have implemented the PBIS program as well.