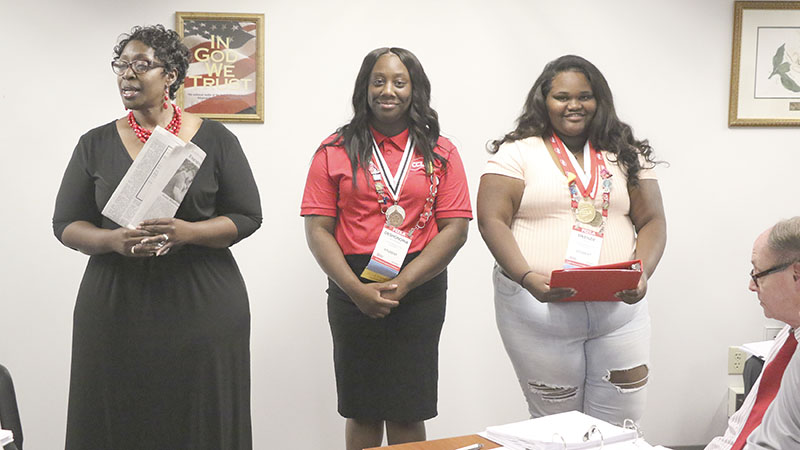 RECOGNITION: From left, Sandra Spanks recognizes two students for their successful efforts in a competition held in California earlier this year, Deshondria Jefferson and Mkenzie Smith. Photo by Jeremy Pittari

Two students and coaches were recognized by the Picayune School District’s Board of Trustees for their accomplishments during Tuesday’s meeting.

Picayune Memorial High School students Deshondria Jefferson and Mkenzie Smith competed in the Family Career and Community Leaders of America Leadership Conference in June of this year, where they competed on the national level. During that competition, Smith earned gold for her presentation on human trafficking, while Jefferson earned a bronze for her presentation about how social media affects relationships.

The girls are members of Picayune Memorial High School’s FCCLA club, which is led by District teacher Sandra Spanks.

The competition was held in Anaheim, Calif., and Smith said it was the first time she got the opportunity to fly out of the state of Mississippi.

After the presentation, the girls addressed the Board about possibly providing financial assistance to the club, since they had to raise funds to take the trip. Smith said the total cost for the trip for her and her mother was about $2,700, which included transportation, meals and daily activities.

Also during the meeting, the Board recognized Rip Tide Fishing Club coaches Tim Herrington and Dwight Bond for their dedication in forming the local fishing team and continuing to mentor the participants, which includes students from all three local school districts.

Herrington said the club is growing. The team formed back in 2016, and every year since the number of participants grows. Last year, the team had about 50 members, this year that number has grown by 40 participants. One of the team’s previous participants currently attends Mississippi College on a fishing scholarship, Herrington said.

Superintendent Dean Shaw then presented the Board with the accomplishments from last year’s District goals. During that time the District’s staff maintained at least an 8 percent fund balance, as outlined in the District policy and brought in six retired teachers to provide assistance to first year teachers and any other teacher who asked for that help. Shaw also presented the Board with this year’s goals, but did not cover them in open session.  He did say that the District currently has an average daily attendance rate of 93.44, and the goal is to stay above at least 92 percent or a letter grade will be deducted from the District’s assessment.

In other matters, the Board accepted a bid from Boudin’s Waste for waste disposal services. The bid was for $6,152 a month for either six or 18 months, which was lower than the other bid received from Waste Pro for $9,473 a month for six months, or $9,283 a month for 18 months.