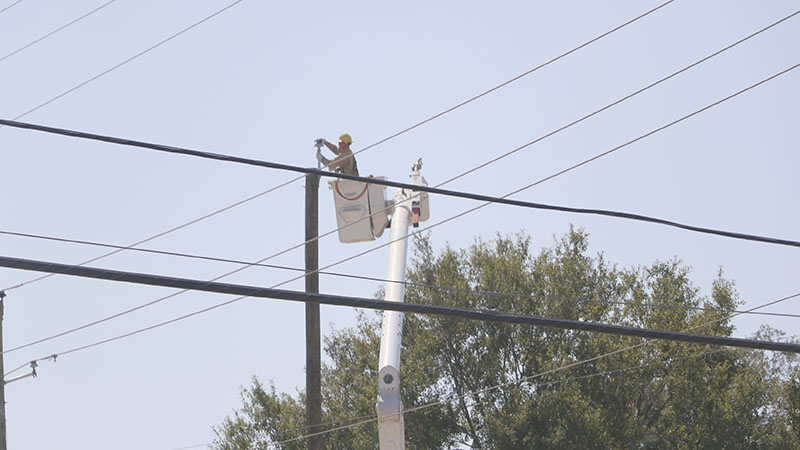 MOVING UTILITIES: With most of the utility lines for water sewer and natural gas already moved, relocation of the city’s power and communication lines is underway. Photo by Jeremy Pittari

Several infrastructure improvement projects are ongoing in the city of Picayune, with a number of them either complete or set to wrap up soon.

Work to replace aging transite water lines within the city limits is about a third complete, said Jonathan Hickman with Dungan Engineering. The $2.9 million project to remove the fragile lines from the city’s infrastructure is set to be complete in spring of next year, weather permitting.

The focus is to remove those pipes in areas of the city where they are known to be in use, such as the Ponderosa subdivision, scattered areas near East Canal Street, the Woodland Heights subdivision and residential areas along the south side of Sycamore Road near Interstate 59.

Long awaited repairs to Stafford Road are mostly complete, with only seeding of grass in the area of the work left to do. Hickman said that project will cost the city about $241,000. The project included overlay of asphalt on the road and installation of a new culvert to replace a damaged one.

A new taxiway was also under construction at the Municipal Airport to create a path for helicopters to taxi to their destination away from hangars where fixed wing aircraft are stored. Additional lighting along the taxiway was approved by the Council during the most recent meeting as a change order, at an additional cost of about $9,000. Hickman said the $858,000 project is mostly funded by the Federal Aviation Administration, with a five percent match each from the city and the state.

Work to relocate utility lines in preparation of the widening of Highway 11 is also nearly complete. Hickman said the water, sewer and gas lines have been moved, with only a couple of water line tie ins left to conduct near Stemwood Drive and Highland Parkway. In order to perform those tie ins, crews will need to bore under the existing highway. A water outage will occur as those lines are connected at a later date. Hickman said the plan is to conduct the work during the night so water service can be restored by the morning. However, customers in those areas will be under a boil water notice after the work is complete.

Efforts to tie in the sewer system in Hide-A-Way Lake to the new lines along Highway 11 will result in a nighttime outage as well. Hickman said engineers and work crews tested the HAWL’s grinder pump system for six hours of down time to see how many men and how many hours they will have to conduct that work with the least amount of impact to the residents. A date to tie that system in has not been set at press time.

Old lines abandoned as part of this work that are more than three inches in diameter will be flow filled with a low grade concrete.

The second phase of the Pearl River County Utility Authority’s efforts to repair the city’s sewer lines should be complete in a about a month. That process involves lining those pipes with a special material that gives the existing lines years more of use.

Installation of a sewer system in the Eagle Heights subdivision off of Highway 43 North is mostly complete, and Hickman said the customers are pleased with the results so far. The Utility Authority is covering the cost of that installation by adding a small fee to each customer’s monthly bill. That bill adjustment will cost each customer a few hundred dollars, which is a savings compared to the $4,000 cost per household for the installation.