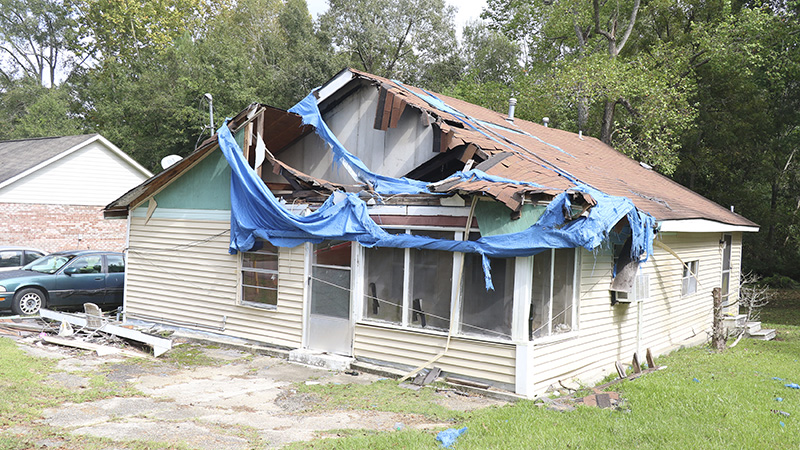 BEFORE SANTA ARRIVES: This house on Monroe Avenue in Picayune was damaged by a falling tree. Habitat for Humanity Bay Waveland is organizing an effort to have it rebuilt in time for Christmas. Photo by Jeremy Pittari

Habitat for Humanity efforts in Pearl River County are starting to  build back up after a hiatus.

Right after Hurricane Katrina, the non-profit organization had a strong presence in this area, at times building multiple new homes at the same time.

But that activity waned locally in recent years. Within the last year, the Bay Waveland affiliate of Habitat for Humanity took Pearl River County into its fold, and efforts are now back on the rise.

Recently, the organization was able to find volunteers and roofers willing to donate their time and talents to build a new roof on a home on Jarrell Street, said Habitat for Humanity Program Director for Pearl River County Courtney Knight.

While the volunteers were there they also replaced some ceiling tiles, did some minor electrical repair and painted some aspects of the home.

The organization’s next project in this area will be to rebuild a home damaged by a falling tree along North Monroe Avenue. Knight said it is the home of Mattie Marks, who has been unable to live there since the tree fell on it. Her husband is the late Rochelle Marks Sr. The hope is to have the home complete by Christmas so she can move back in.

But there’s a lot of work to be done before the first nail can be driven. Knight said the city and the community are working with Habitat for Humanity to get this project done. The city will take care of the demolition of the current home in early November and the community will be tasked with raising money through fundraisers and raffle ticket sales through the rest of the month so construction can begin in December, said Habitat for Humanity Bay Waveland Outreach Coordinator James Reardeon.

Anyone who would like to donate their services or help with the build can fill out a volunteer form at www.habitatbw.org/volunteer.