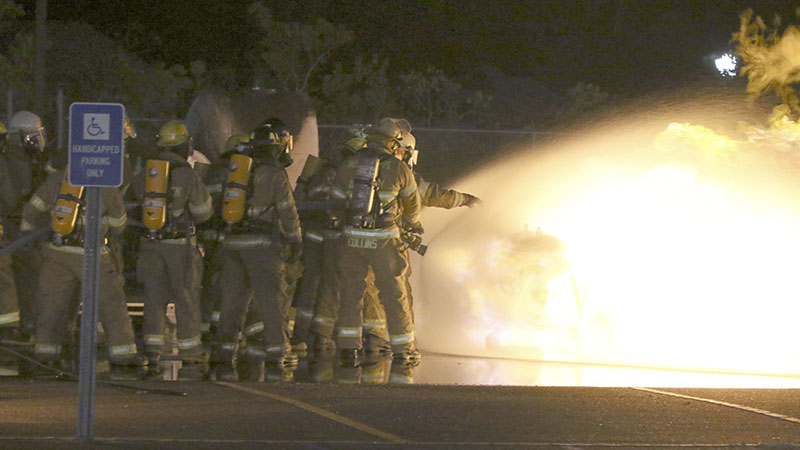 DANGEROUS FIGHT: Firefighters from various agencies practice putting out a propane tank fire by fogging the flaming tank with water while another responder reaches into the flames to turn off the valve. Photo by Jeremy Pittari

As the sun fell on the horizon Tuesday evening, more than a dozen firefighters from local departments gathered at Friendship Park to engage in a simulation mimicking a propane tank fire.

Propane is a heavily used source of energy, and can be found in large tankers being transported on public roads. That fact, along with the methods of transport, characteristics of the gas, and the containers it is shipped and stored in were covered during a class session the day prior to the hands on training.

To ensure that firefighters are ready to respond to a propane tank fire, the Mississippi Fire Academy travels the state to hold classes that prepare them for just such a scenario using grant funding from the LC Gas Board.

Propane tanks employ a number of safety features to prevent them from exploding. Knowledge of how they work can help firefighters put out a propane tank fire.

When propane is stored in a tank, it is kept at such a high pressure that it is in liquid form, typically at 177 pounds per square inch. When it turns into a vapor it expands by as much as 270 times, Abercrombie said.

Those facts and others were shared with the 35 firefighters who attended a class session held Monday. The next day, most of those firefighters got some hands on training using fire hoses and a simulation operated by Mississippi Fire Academy personnel. The simulation starts when controlled propane is turned on and ignited by professionals, creating a large fire ball that engulfs the mock propane tanks. The trainees then use fire hoses set to a fog pattern to slowly approach the flaming tank while another firefighter uses a hose set at the strongest setting to cool the top of the tank where the pressure release valve is located. Abercrombie said that when a tank catches fire the PRV is designed to release pressure from the top of the tank to prevent it from exploding. To reseat that valve, the tank needs to cool. Once the valve is reset, firefighters can approach the tank to turn off the other valve  and thereby extinguish the fire. It’s a dangerous situation that requires training to effectively control.

“A lot of people don’t understand the dangers of what we do,” Abercrombie said.

Each participant of the class, which was comprised of firefighters from the volunteer departments of Carriere, Leetown, McNeill and Harrison County along with personnel from the Picayune Fire Department, received a certificate for completing the course, Abercrombie said.

He said that he appreciates the fire academy personnel offering the training and was glad that so many firefighters participated.