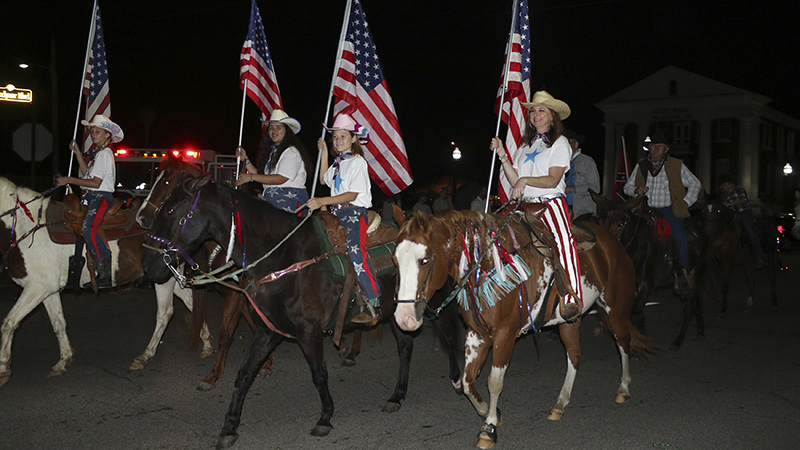 PATRIOTIC: A group of equestrians participate in last year’s Veteran’s Parade in Picayune. This year’s parade will take the same route as last year, starting on Goodyear Boulevard at Crosby Commons. File photo

The community is asked to support local veterans during this year’s annual Veteran’s Parade, set for Nov. 12 at  6 p.m. in Picayune

Tom Milar with the city of Picayune said the parade will follow the same route as last year, which starts with a line up at Crosby Commons on Goodyear Boulevard before heading east where the parade will turn onto Highway 11 towards West Canal Street. The parade will then turn right onto West Canal and head to the intersection of Kirkwood and Goodyear where it will disband.

Milar said he is working on getting more people to participate in this year’s parade. Anyone interested in marching in the parade is asked to call him at 601-273-2131. Participation in the parade is free.

The rest of the community is invited to watch the parade and support Pearl River County’s veterans.

“Hopefully we’ll have a good turnout and good weather and everyone will come out to support the veterans,” Milar said.

So far, a number of current and historic military vehicles are slated to be in the parade, along with the Picayune Memorial High School NJROTC, Maroon Tide band and some members of the local battalion of the National Guard, who will bring some of unit’s vehicles. Some classic cars will also be in the parade.

Milar said he anticipates this year’s grand marshal to be World War II veteran Fred Henley, who served from 1942 to 1945 in the Marines on the USS Intrepid. Milar said that Henley also coached high school sports at Forrest County Agricultural High School and was a principal and superintendent in the Picayune School District.

Poplarville Board of Aldermen ask officer to resign