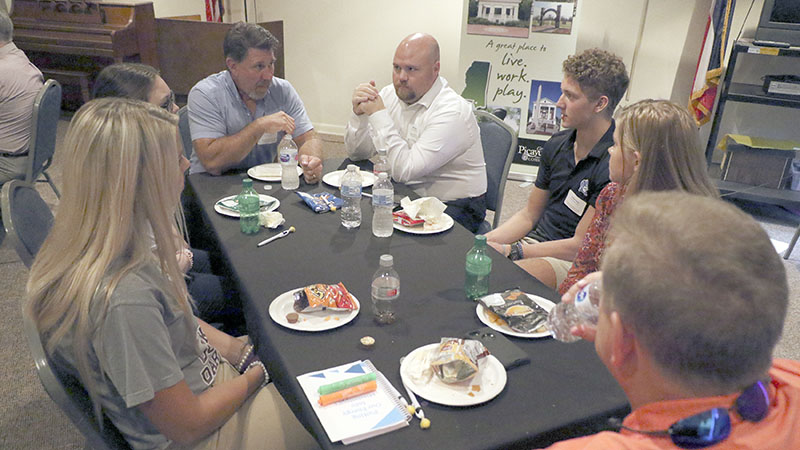 More than a dozen students from Picayune Memorial High School and Pearl River Central High School got a chance to learn about the area in which they live and the difficulties its leaders face.

The inaugural event, called the Student Leadership Summit, was organized by the Greater Picayune Area Chamber of Commerce and aimed to entice the best students from both high schools to come up with ideas to make the city of Picayune and Pearl River County better, said Chamber Executive Director Terry Farr.

To accomplish that task, students engaged in a number of exercises during the summit and also got a chance to have lunch with a number of city and county leaders before hearing from four adults who had some words of advice.

Pearl River Community College President Dr. Adam Breerwood was the first to speak, and advised the students that they could achieve their dreams no matter their background. While Breerwood said he was never supposed to attend college because he came from a family with little money, he put forth the effort and determination to work his way up from a maintenance man and assistant coach at PRCC to eventually be named the president.

As an assistant coach, he would jog with the team past the president’s house on the PRCC campus. As he did he would think to himself that he wanted to be the president, a goal he achieved two years ago.

He also provided advice when interviewing for a job; he said there is one thing all potential employers are looking for, a problem solver.

“You can be a problem creator, or a problem solver,” Breerwood said.

As with any leadership position, a certain level of stress is involved. Breerwood said that during a recent visit to the doctor, his physician advised him to find a less stressful job. But Breerwood said that leaders embrace the pressures of their job.

“Find your ‘why’, your reason to get out of bed each morning,” Breerwood said.

Barrett Brayson, a local insurance agent, also spoke during the event. He told the students to find that one thing they are good at and make a living doing it. Through his life, Brayson said he had a number of jobs, but they didn’t provide him with an avenue to help the community, until he found his current job with State Farm.

Local attorney Bill Cruse advised the students to not be afraid to change their path in life. Cruse said he initially went to college to be a dentist, but changed that path twice until he decided to become a lawyer. Even in the field of law, Cruse said he is better at cases that involve property transfers, as opposed to those of marital dissolution.

“Find something to excel at and go do it,” Cruse said.

The final speaker was Jonathan Trahan, a nurse practitioner for Highland Community Hospital. He spoke about the importance of finding a place to call home. Even though he is a Picayune transplant from New Orleans, and moved away from Picayune after starting his medical career, something pulled him back to Pearl River County. He said it was the sense of taking care of the people in a place he can call home. After working in bigger cities such as Hattiesburg and New Orleans, he eventually came back to Picayune, where he now invests his professional and personal efforts.

One of his most notable pieces of advice for the children was to find a service or product not offered in the area currently and provide it.

“If we don’t have it, that’s an opportunity,” Trahan said.

Students who attended the event said they learned about success and gained some leadership skills.

Some of them have plans for their future. Pearl River Central High School student Johnny Perkins said he plans to either join the Marine Corps or start a career in law enforcement.

Picayune Memorial High School student Lauren Pfadenhauer said she plans to seek a career in the medical field, possibly as a pediatrician. While Perkins plans to move to another state to pursue his career, possibly Colorado, Pfadenhauer said her plan is to stay close to Picayune.

Farr said the students will now be tasked with creating a presentation on how to overcome the city’s obstacles to share with the City Council at an upcoming meeting.