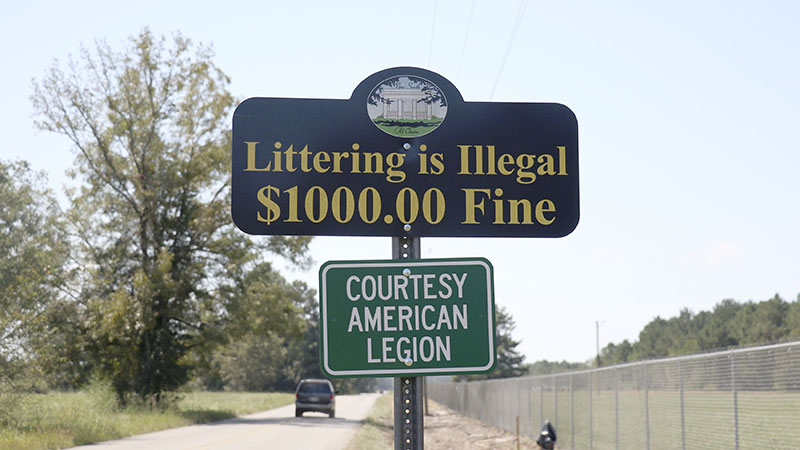 FACE THE FINE: Signs like this one across the city of Picayune alert motorists to the penalty for littering. This sign was installed at the expense of a member of American Legion Post 73. Photo by Jeremy Pittari

About a year ago, a member of American Legion Post 73 in Picayune decided to pay for an additional sign to be installed along Union School Road alerting motorists to the penalty for littering.

Bill Leaumont, a 22 year veteran of the Air Force who served two tours in Vietnam, said he decided to purchase the sign about a year ago to place on the road where his club is located as his way of fighting the litter problem in Picayune.

And now he encourages other clubs in the area to do the same thing.

Public Works Director Eric Morris said the city initially installed a limited number of the signs in key areas because of the expense involved, which led to Leaumont offering to pay for the sign on Union School Road near Palestine Road.

While the city does not advertise that availability, Morris said that if other members of the community wanted to request a sign be placed in a certain area and pay that expense, the city would be willing to do it. However, the city would have the final say as to the exact location where the sign is installed.

“Litter is a big deal. I know every city fights it,” Morris said. “As public works director I appreciate anything anyone is willing to do to help.”