Blue Devils pull in first win of the season 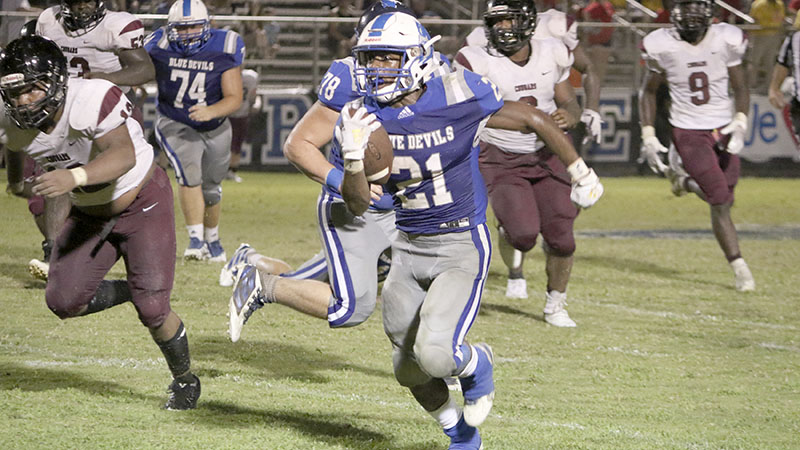 Pearl River Central's Detrich Spikes carries the ball during Friday's win against Lawrence County. The Blue Devils earned the team's first win of the season during the Homecoming game, 42-21. Photo by Jeremy Pittari

What appeared to be a close game at first was dominated by a Blue Devil offense and defense late in the second half.

The Devils entered the second half with a lead of only 6 points. And even though the Lawrence County’s Cougars took the lead for only a brief moment again in the third quarter, the Devils scored three more times in s the rest of the half to secure the team’s first win of the season.

The game began with a bang, when Quincy Lewis returned the initial kickoff of the game for more than 65 yards for a touchdown for the Cougars. With 11:47 still on the clock in the first quarter, Edwardo del Angel found the center of the uprights, giving the Cougars an early 7-0 lead.

Possession of the ball would change hands two more times before the Blue Devils took possession at their own 35. Five plays later, Detrich Spikes carried the ball from the Cougar’s 17 for a touchdown with 1:31 left on the clock. Damon Duke’s attempt at an extra point fell wide, leaving the score at 7-6 in favor of the Cougars.

After the ball changed hand a couple more times, a fumble by the Cougars was recovered for the Devils by Branson Logan. The home team used that opportunity to reach paydirt two plays later when Kevin Wilcox crossed the end zone from the one yard line. With just :24 left on the clock in the first, a failed attempt at a two point conversion left the Devils with a 12-6 lead.

Three plays later, Lewis again make a big play for the Cougars for about 50 yards for another touchdown that brought the score to 14-12 after Angel’s successful PAT. Eleven minutes and 45 seconds remained in the half.

The Devils got the ball within striking distance four plays later, but a more than 30 yard run by Spikes to the end zone was called back for a penalty against the home team. During the repeat of the play, Ronald Murray toted the ball the same distance for a Devils touchdown. With 9:09 left in the first half, a two point conversion run by Ty Herring gave the Devils a 20-14 lead, which the team held going into half time.

The second half is where the Blue Devils really shined, only allowing the Cougars one big play, but dominating the rest of the game on both sides of the ball.

Deep into the third quarter, the Devils set the Cougars up on their own 3 yard line with a punt. With little room to move, Lewis found a hole in the Devils defense and carried the ball for more than 95 yards for a touchdown with 3:47 left in the third. Angel’s PAT put the score at 21-20, but it would be the last time the Cougars had the lead during the Devils’ Homecoming game.

Three more scoring plays by the Devils would widen that lead. With about two minutes left in the third quarter a fumble by Herring as he headed toward the end zone was recovered by Kade Pearson, who carried it the rest of the way for a Devils score with 1:29 left in the third. Another two point conversion run, this time by Wilcox, gave the Devils a 28-21 lead.

After the Cougars fumbled the ball on their subsequent possession, the home team used four plays to find pay dirt, allowing Herring to cross the end zone from the Cougar’s six yard line. Duke’s kick put the Devils’ lead at 34-21.

The Cougars would try to reach the end zone one last time by using an alternating succession of nine reverse run plays, but the Devils figured it out and stopped the drive at their own seven yard line, taking possession of the ball there. A botched play put the ball at the four, where Spikes would carry the ball for more than 95 yards to pay dirt, bringing the Devils’ lead to 42-21 with Duke’s kick just shy of six minutes left to play.

“I’m very proud of our kids tonight. They fought through adversity. When things took a turn for the worst and we could have hung our heads, we battled.”

He said that amount of spirit is what he’s been waiting to see from his team.

PRC pulls in first win of the season