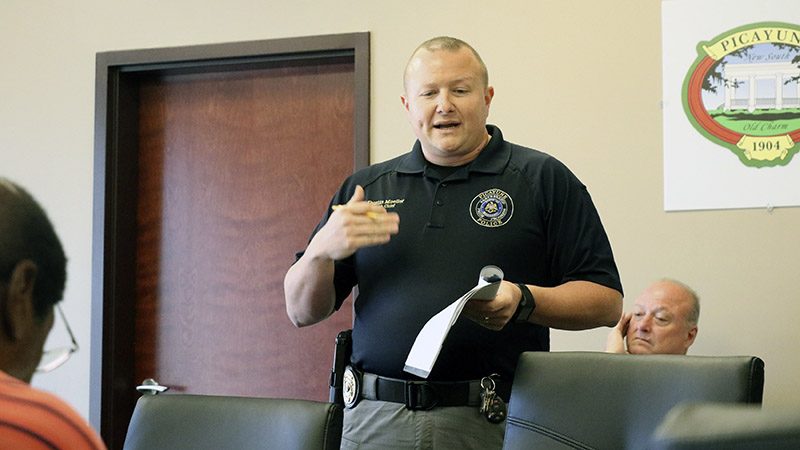 MORE CALLS, LESS OFFICERS: Assistant Chief of Police for the Picayune Police Department Dustin Moeller gives a presentation to members of the City Council about the growing need for more police officers on the streets. Photo by Jeremy Pittari

During the presentation, Councilors were painted a picture of failing equipment, and a limited number of officers available to work an ever increasing number of calls for assistance.

Lt. Brandon Penton began the presentation with his explanation as to why additional electronic control devices, commonly referred to as Tasers, are needed. He said that most of those devices in use today are 12-years-old, so many don’t work reliably. At times it may take up to five to six attempts before a less than optimal Taser fires, creating a situation where a police officer could be at risk of injury.

In response to the situation, Penton suggested the Council consider entering into a five-year contract with Axon Enterprises that will provide 20 brand new devices along with free cartridges and batteries for the life of the contract. At the end of the five years, the department will own the devices.

The contract will cost about $8,000 per year. For comparison, Penton said that the cost to purchase just one of the devices is about $2,700 with a two year warranty, and then there’s the cost to replace the cartridges and batteries. Batteries for Tasers are not rechargeable, and last one to two years before needing replacement.

Cartridges can cost up to $35 per unit, and batteries can run as much as $80.

The biggest request the department made was for additional personnel. Assistant Chief Dustin Moeller said that need is greater today than it was in 2004 just prior to Hurricane Katrina. For comparison, he said the department’s budget in fiscal year 2004 was 3.1 million, this year’s budget was about $100,000 less than 2004’s. He added that today on a typical shift, four officers are on patrol. Back in 1978, a shift would have three officers on patrol.

Tuesday, Moeller asked for an additional $214,000 to hire those additional officers. It was unclear if that cost included the other expenses involved with hiring more officers, such as patrol vehicles, training, and equipment, not to mention benefits.

During that time, which was from May to Aug. 1, crime in those areas dropped by 94 percent, from 302 reported crimes to 17 compared to the previous year. Crimes included in that statistic were those typically performed by children who are out of school for summer break, which included instances of malicious mischief and various types of burglaries.

Moeller added that once the street crimes unit was dissolved for the start of the current school year, officers worked eight instances of vehicle burglaries.

The number of calls for service for a police officer last fiscal year totaled 31,647, to be responded by one of the four officers on shift. During that same period, firefighters responded to 588 calls, and that department typically has 11 firefighters working each shift, Moeller said. The number of calls for service by an officer in 2012 was 24,832, indicating an ongoing increase with each year, he said.

Moeller said that when a wreck occurs on Interstate 59 within the city limits,  as many as three of those four officers working a shift are needed to work that wreck, leaving only one officer to respond to calls from the community.

Additionally, the annexation conducted by the city back in 2012 added more than five square miles to the area covered by Picayune Police officers, equating to 20 additional businesses, 200 homes and 800 residents.

He added that the city has a crime rate that is 8 percent higher than other cities of comparable size, in part due to this area’s proximity to New Orleans and Slidell, La.

“We need your help. We really do,” Moeller said.

After the presentation Councilors Larry Breland and Lynn Bogan Bumpers said that they agree something needs to be done to address the staff shortage in the police department.

The presentation was only a request, which will be considered by the Council.

Local hospital does not see increase in heat stroke…