More than $36,000 found in search of Poplarville home 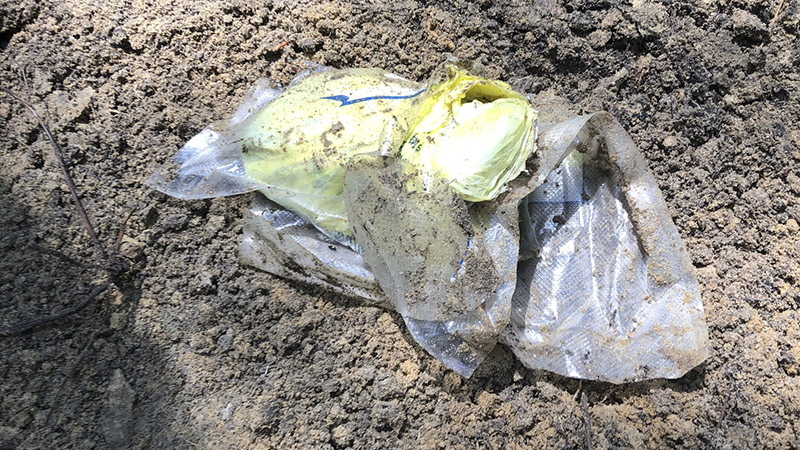 FROM THE DIRT: This bag containing cash was found during a search of a Poplarville home as part of an ongoing drugs investigation. During that search, Pearl River County Sheriff’s Department personnel found more than $36,000 in cash inside and outside the home. Submitted photo

Continued investigation into one of the largest drug busts in the county’s history led to the discovery of more than $36,000 in cash in and around the suspect’s mother’s home.

Pearl River County Sheriff David Allison said this most recent warrant was the result of continued investigation into the July 16 arrest of Brian Travis, of 286 White Sand Road. On that date, a team of law enforcement officials from across the coast worked with the local Sheriff’s Department to conduct a search of homes located at 286 White Sand Rd., and 303 White Sand Rd., Poplarville where they found about 20 pounds of methamphetamine worth about $500,000, according to previous coverage.

Allison said that continued investigation learned that a large amount of money may still be at Travis’ mother’s home, located at 286 White Sand Rd., which led to another warrant being served on Aug. 15. In that search, agents with the Drug Enforcement Agency, local Sheriff’s Department deputies and investigators along with personnel with the Pearl River County Road Department found more than $36,000 in cash inside and outside the home. Allison said the road crew was involved because a large piece of excavation equipment was needed to dig in areas where cash was suspected to be stashed.

Inside the home, about $6,000 in cash was found during the search. The remaining $30,000 was dug up from places on the property. Allison said that during the search investigators noted several areas outside the home where it appeared as though someone else attempted to locate the cash using shovels prior to the search warrant being served on Aug. 15.

The currency found in the search was seized since it was suspected to have been obtained through the sale of illegal narcotics, Allison said.

Allison said he would like to express his appreciation to the DEA and Pearl River County Road Department for their assistance.

One arrested, another being identified in rash of burglaries