Hornets earn first win of the season against Blue Devils 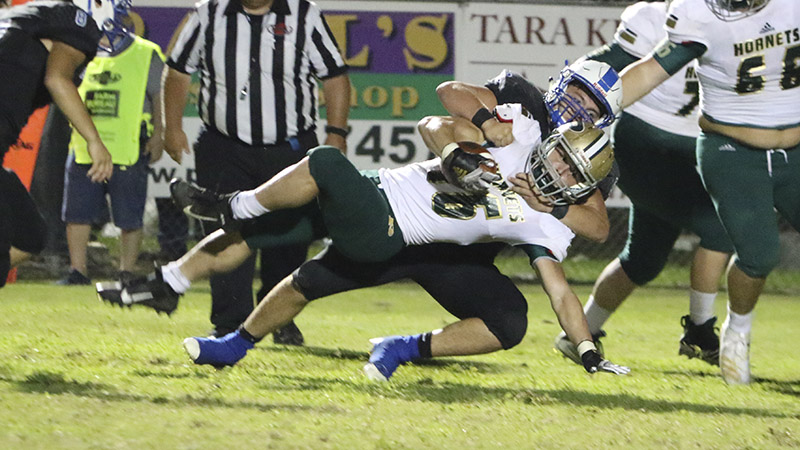 This story has been updated to correct the name of Poplarville’ kicker.

Pearl River Central’s Blue Devils started off strong against Poplarville’s Hornets with an early field goal for about 50 yards, but could not hold the momentum against a rallying Hornets.

The Blue Devils started the game with an 82 yard drive in nine plays to get within striking distance of the goal posts. Midway through the first quarter, Sam Lambert kicked a field goal from Poplarville’s 30 yard line for a field goal.

The Blue Devils held that 3-0 lead through the remainder of the first quarter, but Poplarville took the lead early in the second quarter when a three play drive would result in Chase Shears toting the ball from the Hornet’s 33 all the way to pay dirt with 11 minutes still remaining in the half. Zach Carpenter’s successful PAT attempt gave the Hornets a 7-3 lead.

The Hornets would score again after getting the ball back on a fumble at the 25. Five plays later Shears would cross the goal line again with 5:15 left in the first half and Carpenter’ PAT brought the Hornets’ lead to 14-3.

PRC assumed possession of the ball, but couldn’t convert plays into a first down. During the ensuing punt, the ball sailed above Lambert’s head, putting the Hornets at the Devils’ one yard line. Two plays later Blaise Breewood would capitalize on a keeper for a touchdown with 2:02 left in the second quarter. Another successul Carpenter PAT attempt brought the score to 21-3.

The Hornets would regain control of the ball two plays later when Zac Owen intercepted a pass intended for Ty Herring at the Devils’ 23 yard line. Breerwood capitalized on the ideal field position by completing a pass to Shears for a touchdown with only a minute left to play in the first half. Carpenter again found the center of the uprights, putting the score at 28-3 heading into halftime.

At the start of the third quarter, the Hornets only needed three plays to again add to their growing lead when Gregory Swann carried the ball from the Devils’ 30 yard line for a touchdown. Carpenter added an extra point, putting the score at 35-3 with 11:03 left in the third.

The Blue Devils found a groove after that, utilizing a five play drive starting from their own 31 to reach pay dirt when Detrich Spikes scored from the four yard line with 8:14 left in the third. Lambert’s PAT narrowed the Hornets’ lead to 35-10.

Heading into the fourth quarter both teams began to give a more energetic showing. The Hornets would score again with 9:30 left to play when Breerwood ran from the Hornets’ own 33 all the way for a touchdown. Carpenter again found the center of the uprights, bringing the score to 42-10.

The Devils had one last score in them, with a 16 play drive starting from their own 28 when Ty Herring crossed the goal line with only 24 seconds left to play. Lambert succeeded in his PAT attempt, ending the nights score at 42-17.

Jay Beech, head coach for the Hornets said the Blue Devils brought some surprises in the first quarter but his team was able to overcome them in the end.

“They obviously took it to us in the first quarter, and we missed some blocks and they had a few new blitzes for us. It took us a little while to adjust to it, but after that we settled down a little bit,” Beech said. “I’d like to give Pearl River Central credit for being a very improved team.”

However, the Hornets now have their first win of the season after coming off a loss to Laurel last week.

“I’m proud of our team for the way we fought, we played great and we’re going to go on to next week,” Beech said.

Jacob Owen, head coach for the Blue Devils attributed the night’s loss to mistakes made on both sides of the ball.

“We just got to work hard to eliminate those mistakes and become better every week.”