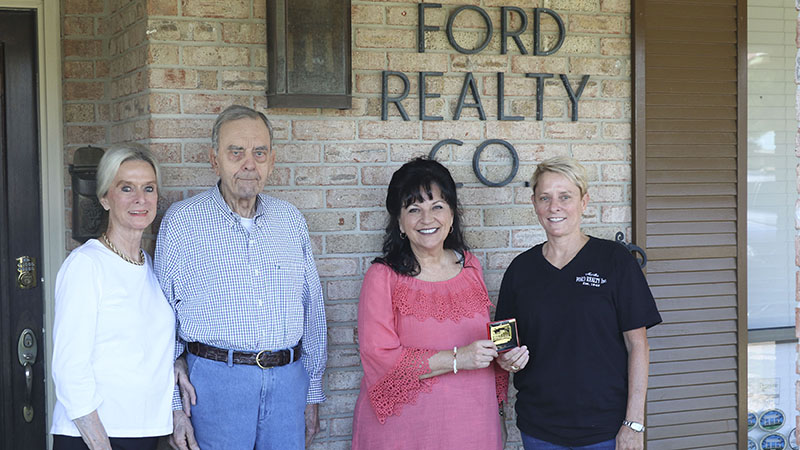 SEVEN DECADES: Ford Realty has been selected as the location in Picayune that will be commemorated as a Christmas ornament through Picayune Main Street. From left are Loretta Ford, Glen Ford, Picayune Main Street Director Reba Beebe and Martha Ford. Photo by Jeremy Pittari

Picayune Main Street’s 20th Christmas ornament will celebrate three generations of a real estate business operating in the Picayune area for the past 70 years.

Ford Realty will be the subject of this year’s Christmas Ornament, available at the Picayune Main Street office and some local retailers, said Picayune Main Street Director Reba Beebe. The ornament will celebrate the business’ 70 years of operating in Picayune, a business that has been owned and operated by three generations of the Ford family.

The new ornaments can be purchased for $15 at the Main Street office inside the Intermodal Tourism Center on Highway 11, Melinda’s Fine Gifts, Barzé Place Antiques & Collectibles Mall, the north branch of First National Bank and the Glass Porch.

Like each ornament released by Picayune Main Street, this year’s will feature a history of the location it commemorates.

Ford Realty was founded in 1949 by J.C. Ford in the old Picayune Drug Store Building. Glen Ford would join his father in running the business after returning from a tour with the Army, the history states.

Glen Ford ran the business from 1979, until 2012 when he retired and his daughter, Martha Ford took ownership and became the broker, the history states.

Beebe said that previous ornaments are also available at the Main Street office.