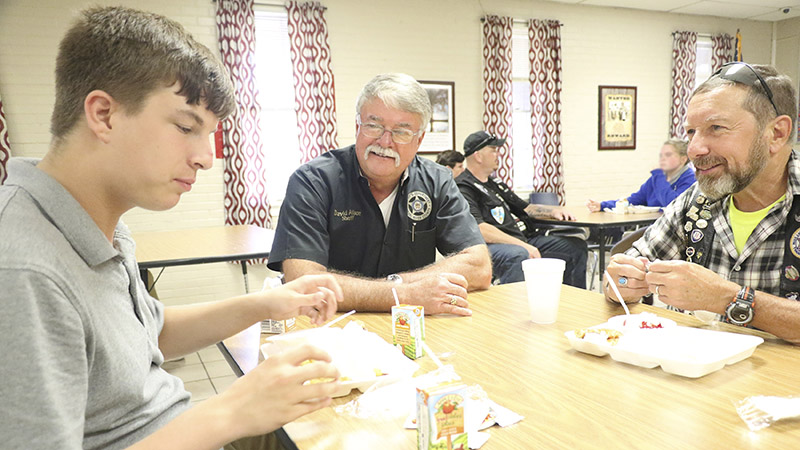 This week, members of Blue Knights MS Chapter IX spoke to students at Pearl River Central’s Endeavor School about making good life choices and not judging people by their appearances.

The visit gave the members of Blue Knights MS Chapter IX a chance to speak to students about how making good life choices now can help them reach their life goals. During the presentation, the club members were dressed in typical attire suited for riding motorcycles safely, which gave the members a chance to speak to the children about not judging people based on how they are dressed.

Club Vice President Mike Johnson started the presentation by bringing attention to his attire, comprised of a leather vest, jeans and leather boots. He said that even though that wardrobe may look intimidating, it doesn’t mean that every person dressed to ride a motorcycle is a bad person.

Additionally, every member of the Blue Knights is an active or retired law enforcement officer, which is a job that puts them in situations where people may spit, shoot at or fight with them while effecting an arrest.

Johnson said that during his career in law enforcement he has not only dealt with hostile people, he also had to learn the correct way to speak to people in every situation in order to succeed.

Club President David Ervin then spoke to the children about the importance of making positive life choices so they will be able to succeed. At times, that may mean putting differences aside and be mindful of how to treat others, because ultimately each person decides how they will react to a situation. A good start toward that end is to maintain a neutral perception of people and put forth the effort to make those who are sitting alone feel welcome. He used a situation where a student may be eating alone; instead of making fun of that student, they may try eating lunch with that individual.

Sheriff David Allison, who is also a member of the club, began his presentation by asking the students what they want to be when they grow up. After several children shared their career goals, Allison reminded them that in order to achieve it they need to make the right decision during tough situations while they are young. The wrong decision even at a young age could prevent them from being hired for their desired job.

He also reminded them to show respect to their parents, teachers and everyone they come into contact through life.

Lawrence Krantz III, a retired law enforcement officer and member of the club, said he knows what children go through when they are put in tough situations, because he saw the instances of poverty and less than ideal living conditions during his time as a school resource officer. He also advised the students to try to see things from the perspective of others.

“Nobody can hold you back but you,” Krantz said.

“This is the beginning of you succeeding,” Griggs said.

He added that they should not be afraid to talk to a police officer if they need help or just want someone to talk to.

After the presentations, the club members sat with the students and talked about various topics over lunch.