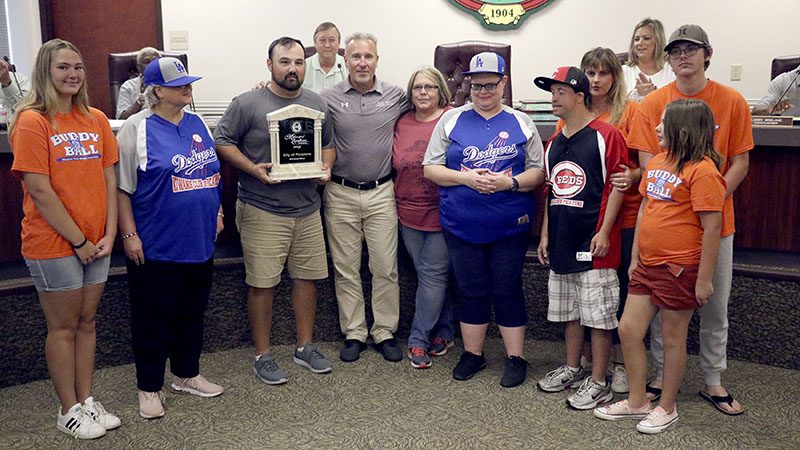 RECOGNITION: Organizers and volunteers of the Buddy Ball program in Picayune were recognized during Tuesday’s City Council meeting for being named the Best Overall project by the Mississippi Municipal League. Photo by Jeremy Pittari

For the second meeting in a row, the Picayune City Council heard complaints of the garbled process non-profits face in order to rent Crosby Commons for an event.

During the June 18, meeting, a nonprofit organization planning to hold a worship service at the park addressed concerns that the fees to rent the park increased and that the deposit was not returned to them the year prior, even though they left the park in better condition than when they found it.

Tuesday, Donnie Pascal and Rashell Dawsey, organizers of a new non-profit called Sundown in the City Inc., said they too tried to rent Crosby Commons to show a series of movies at the park. They wanted to hold the event for free to the public, and as such asked to rent it for free, but were told there would be a fee to rent the park. When Mayor Ed Pinero asked the pair to speak with City Manager Jim Luke about the matter, they said Luke was the person they spoke with.

Luke said he was only abiding by the ordinances set forth by the Council and if they would like to make changes he will enforce those in the future.

Pinero and several Councilors said they would be willing to revisit the park rental ordinance to establish consistent pricing schedule and possibly a more reasonable non-profit rate.

Councilor Tammy Valente said she would like to see the park used more often for events, and readdressing those rates would be a step in that direction.

Councilor Wayne Gouguet agreed, but did add that if a liquor license was required for an event to be held at the park, a fee would be charged. Any free events would require the park to remain open to the general public, even if those people would not be taking part in the event.

Councilor Lynn Bogan Bumpers also asked that when the fee schedule is revamped, that it apply to all parks in the city. While city employees draw up a new schedule, Gouguet asked that a list of how often each park has been rented and the price each group paid be drawn up for review by the Council.

The next Council meeting will be July 17 at 5 p.m. in City Hall.