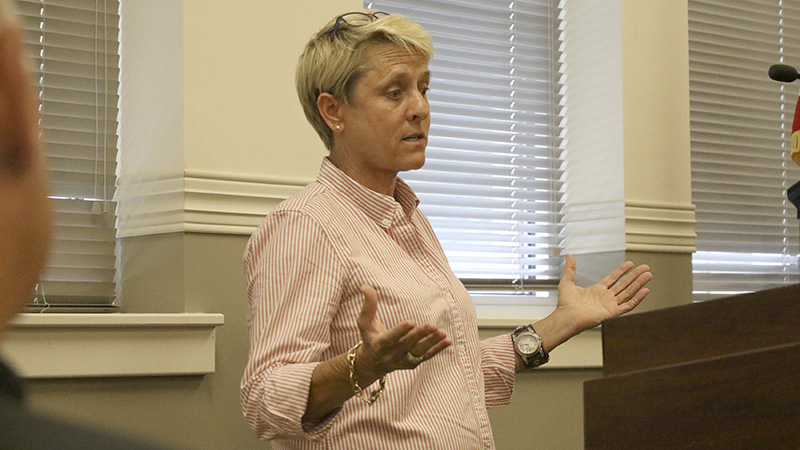 FIGHTING FOR HER PROPERTY: Local business owner Martha Ford addresses her concerns with a proposed project that would end up taking even more of her land for right of way acquisition. Photo by Jeremy Pittari

The matter was concerning applying for a Mississippi Gulf Coast Restoration Grant, which is funded with a settlement from BP for the Deepwater Horizon oil spill back in 2010. The city would be required to pay a match of $500,000 to get this year’s grant if it is approved.

Those funds will be given out to counties that apply for funding once per year for the next 15 years. Applications are sent to the Mississippi Development Authority for review, before qualifying projects are sent to the Legislature for final approval.

Just before discussion of the matter, Councilor Tammy Valente, who is also a real estate broker, recused herself from the meeting. Later in the meeting she addressed the reason for recusing herself, stating she is a member of the church whose members are involved in the plan to build some sort of retail development at the end of E. Jerusalem Avenue.

Ford Realty is located at the corner of Memorial Boulevard and E. Jerusalem Avenue.

During the Council’s discussion of the project, Councilor Wayne Gouguet expressed opposition, since he felt the city’s limited funds to cover the match should be used to build another industrial park, which would provide more high paying jobs as opposed to a retail center.

“We don’t have millions and millions to put up as a match for BP money,” Gouguet said.

Councilor Larry Breland disagreed, saying going forward with the retail project would be a “golden opportunity” for economic development.

City Clerk Amber Hinton said that municipalities can apply for funding once per year, and this year’s deadline to submit the application is Aug. 3.

Mayor Ed Pinero expressed interest in getting public opinions about the project, specifically from the business owners who would be directly affected, before moving forward. The Council later approved a motion to apply for the grant funding, with Gouguet opposed. Valente recusing herself from the matter meant she did not vote. No Councilor was absent from Tuesday’s meeting.

At the end of the meeting, Ford shared her reasoning for being against the project. She said that through the years her father, who established Ford Realty and eventually handed the business down to her, worked hard to establish its current location.

She became aware of how the project at the end of Jerusalem Avenue would affect her business after she got a call from Allen Hickman, the pastor of Resurrection Life. Hickman was calling on behalf of his brother-in-law who was working on the development. That man recently passed away.

Hickman asked if Ford remembered a prior conversation with the deceased man concerning providing support for the development. Ford said she did recall offering her support, but said that conversation did not entail her giving up more of her property to make the road wider as requested during Tuesday’s meeting.

“I said one day I might build a smaller building next to Ford Realty and make it a daiquiri store,” Ford said.

She went on to explain that her father’s property has been slowly chipped away through the years due to right of way acquisitions, to the point that the parking on the side of her business along Jerusalem Avenue technically no longer belongs to her. If she were to concede to giving up more of her land for the proposed project, she would have to demolish her current location, and build a smaller one closer to Waffle House, a sacrifice she is unwilling to make due to the memory of her father.

“…there’s nothing left for me to give,” Ford said.