Council hears urge for all residents to participate in 2020 Census 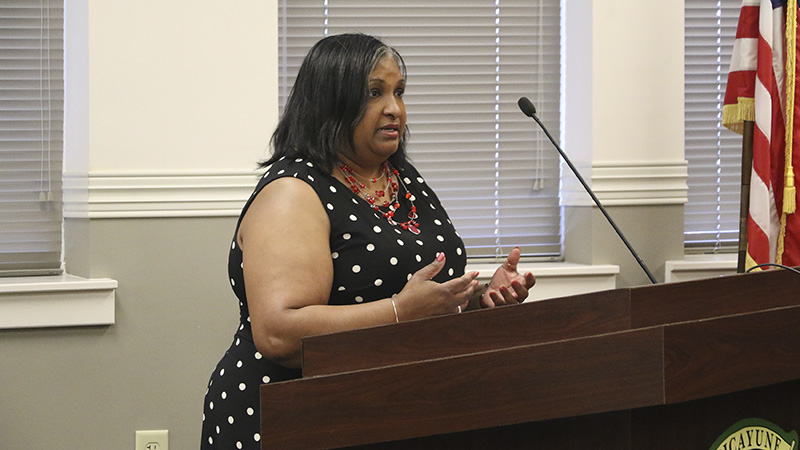 ACCURATE NUMBERS: Traycee Scott-Williams speaks to the Picayne City Council to express the importance of everyone in the county being counted during the upcoming Census. Photo by Jeremy Pittari

Increased participation in the upcoming Census was urged during Tuesday’s City Council meeting.

Traycee Scott-Williams, a partnership specialist with the Atlanta Regional Census Center, addressed the Council about the need for every person to be counted in this and every county within the state.

She said that each year $675 billion is up for grabs in federal funding, and for each Mississippian that is not counted more than $2,000 is lost to the state.

Additionally, due to excessive low participation in 2000,  Mississippi lost one of the 435 seats of representation in Congress, bringing the Magnolia State down to four.

The last Census was conducted in 2010, during which Pearl River County had an average participation rate of about 20 percent. Within the city limits of Picayune, that rate was just below 30 percent, she said.

This time around, residents will have the option of filling out the Census via phone, Internet and by mail. Mailed forms will be sent out in April of 2020.

There are also employment opportunities for local residents to assist with the count. More information on temporary employment during the count can be found at https://2020census.gov/en/jobs/job-details.html or by visiting the WIN Job Center in Picayune on Cooper Road.

In a separate matter, the Council approved a motion to  temporarily suspend rental fees for Crosby Commons to nonprofit organizations, including churches. Qualifying events would need to be held by registered nonprofits that are free and open to the public, and that organization would still need to pay the $500 deposit. If alcohol will be served, the organization will still need to provide security. Since the temporary change only applies to Crosby Commons, Councilor Larry Breland asked that a uniform rule be made concerning all parks.

City Manager Jim Luke said that during the temporary period, he will work up a new citywide ordinance that would be presented to the Council.

The Council also approved a motion to hold a public hearing to amend the city’s flood damage prevention ordinance using the most up to date flood maps. Code Enforcement Officer Tom Milar said the new maps include changes that will affect a small number of residents. Milar said he would like to hold the public hearing at the end of the month in the Intermodal Tourism Center on Highway 11.

— Approved a motion to amend the school security services agreement for the upcoming school year.

— Approved a motion to install a sidewalk from Carroll Street to the main entrance of Roseland Park Elementary.