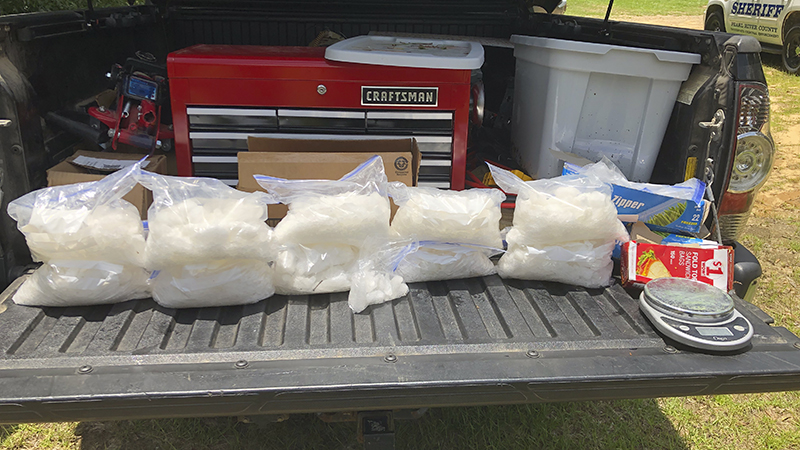 The largest amount of suspected methamphetamine to have been found in this county occurred during a bust last week by the Pearl River County Sheriff’s Department in conjunction with several other Gulf Coast agencies.

The team, armed with search warrants for two homes on White Sand Road near Poplarville obtained as part of a cooperative investigation between all departments attempted to locate 39-year-old Brian Roberto Travis, of 303 White Sand Road. A warrant was also secured for a home located at 286 White Sand Road., which Allison said was suspected to be used by Travis to sell narcotics.

During the search, the team found about 20 pounds of a substance suspected to be methamphetamine along with $10,000 in cash. Allison said the find is believed to be the biggest single seizure of methamphetamine in county history. The drugs had a street value of about $500,000.

Travis, who was found at 303 White Sand Road during the search, was arrested for trafficking methamphetamine and booked into the Harrison County Jail by DEA agents, Allison said. He will be held without bail until he can be brought before a federal judge, Allison said.

That same day the team of law enforcement officers from those various agencies served another warrant at 102 Zion Church Rd., Apt B, the home of 32-year-old Willie Cordero “Little Cody” Jefferson. During the search, a large amount of methamphetamine, marijuana and some paraphernalia that included scales and packaging material was found, Allison said.

Several thousand dollars worth of cash and two firearms were also found in the home, the Sheriff said.

Allison said he would like to thank the other agencies for their assistance in this case.

In a separate ongoing case, Alfred Clark, 46, of 62 Hickory Lane, a man wanted in connection with a previous case that lead to a search of his home on June 27, was found and arrested for possession of methamphetamine with intent to distribute and possession of marijuana with intent to distribute. The warrant was issued after a search of his home discovered those controlled substances.

Allison said he would like to thank the Picayune Police Department for assisting in the investigation and for taking Clark into custody.