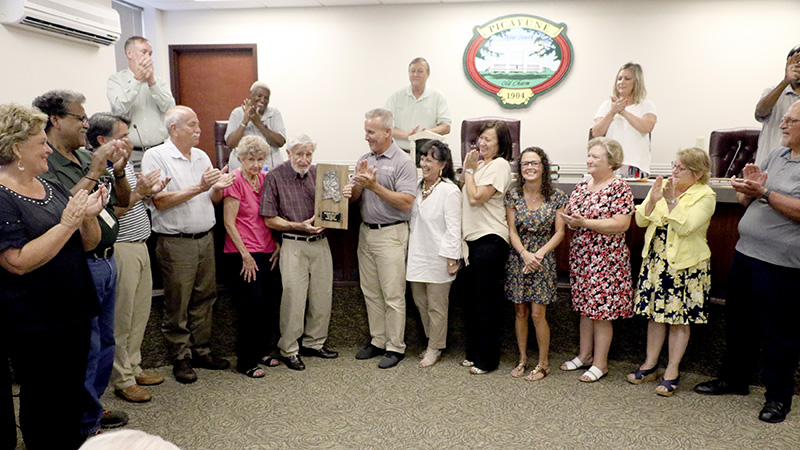 COMMUNITY CONTRIBUTION: Center, Bill Edwards was recognized for his contributions to the community by restoring dozens of commercial and residential properties in the city of Picayune and for being a long standing member of Picayune Main Street. Photo by Jeremy Pittari

Two recognitions kicked off Tuesday’s City Council meeting, which ended with complaints against an officer of the Picayune Police Department that may have been unfounded.

Bill Edwards was recognized for his contributions to the community for his work to preserve and restore dozens of commercial and residential properties in the city and for being a founding and longstanding member of Picayune Main Street, while Buddy Ball was recognized by the Council for being named the top overall project by the Mississippi Municipal League.

The Council also accepted a $3,000 grant from the Petco Foundation to keep the Picayune Fire Department’s arson dog, Izzy, certified to sniff out accelerants in the instance of a structural or other fire suspected to be the result of arson. Picayune Fire Marshal Pat Weaver said the funding will ensure Izzy is certified for another two years. He added that there are only about 100 arson dogs in the country, and Izzy assists with arson investigations in the city limits and in the county when requested.

Five-year-old Izzy is the second arson dog the department has had on staff, replacing Joanie when she retired in 2017.

At the end of the meeting, county resident Jonathan Freeman addressed the Council with allegations that he was disrespected during a traffic stop.

Freeman said the stop occurred on June 22, at about 7 p.m. on Rosa Street. When he asked why he was stopped, he said that the officer told him it was for an expired tag, however Freeman said he had the new sticker for his tag, but had yet to apply it. He also alleged the officer made inappropriate comments during the stop on at least two occasions. When Freeman brought the ticket to the Police Department to dispute the ticker and make a complaint, he was told the ticket was for an illegal lane change.

He added that when he spoke to a commanding officer to make that complaint, the officer told him he was lucky to have only received one ticket.

At the end of his complaint to the Council, Assistant Chief Dustin Moeller asked for a second to address the allegations made against the officer in open session. However Mayor Ed Pinero suggested Freeman speak with City Manager Jim Luke.

After the meeting, Moeller said that the body cam footage from the incident in question has already been reviewed, and disciplinary action will not be required.

In other business the Council;

— Asked City Manager Jim Luke to check into establishing or enforcing an ordinance to ensure 18-wheelers that are parked on city streets while the driver is home are not blocking traffic or otherwise negatively affecting other residents.

For more on Tuesday’s meeting, see a subsequent edition of the Item.