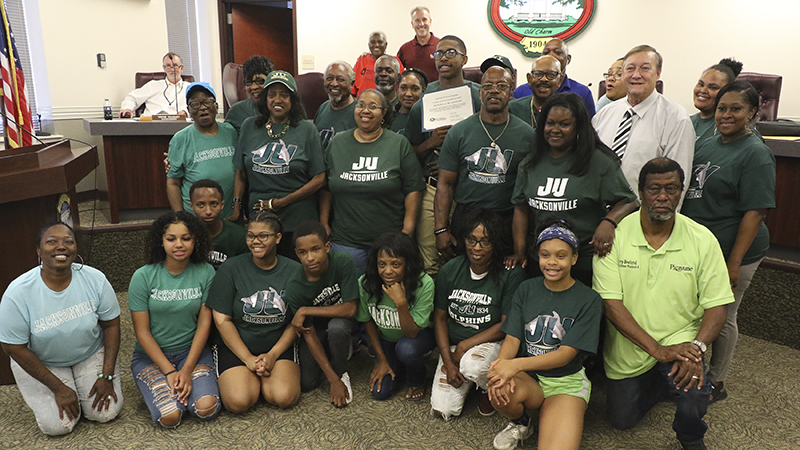 After recognizing a Picayune Memorial High School graduate for being signed to Jacksonville University, Fla. the Picayune City Council approved making changes to how school resource officers are paid overtime while working after school events.

Arlando Marvun Arnold is a recent graduate of Picayune Memorial High School and was named one of the state’s top ten basketball players this year, according to information read by City Manager Jim Luke during Tuesday’s meeting. In recognition for recently being signed to play for Jacksonville University, the Council, and a standing room only crowd of community members wearing Jacksonville University T-shirts, gathered in City Hall to show their support.

In a separate matter, Police Chief Bryan Dawsey presented a change to the city’s contract with the Picayune School District to ensure that overtime paid to school resource officers counts toward that officer’s retirement in the PERS program.

Dawsey said that in previous years, officers who worked overtime by providing security at after school events were provided a check from the District. Dawsey said the change will require that the District make those payments through the city so the extra income can count toward their retirement. He estimated that a school resource officer can earn an extra $5,000 to $7,000 annually in overtime while working those events. Dawsey said the change to the contract is also requesting two more patrol vehicles for those officers. The Council approved a motion to make that change.

— Approved a motion to appoint Councilor Larry Breland as the city’s voting delegate in the election of the vice president for the Mississippi Municipal League.

— Approved a motion to appoint Antha Mitchell to replace Terry Givens on the Picayune Housing Authority Board.

Board of Aldermen swear in new police chief, discuss…