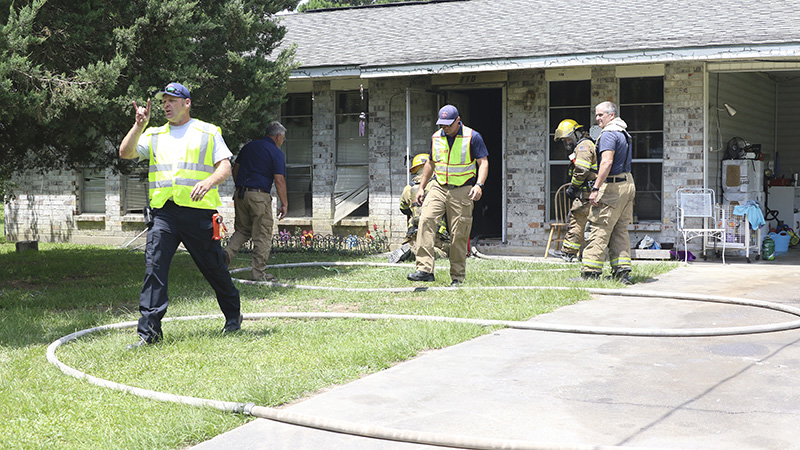 CLEARING THE SMOKE: Firefighters with the Picayune Fire Department use a gas powered fan to clear a home on Merrydale Drive of smoke caused by what is suspected to be a kitchen fire Tuesday morning. A 15-year-old girl was asleep in the home at the time of the fire, and was later transported to a New Orleans area hospital for treatment after being rescued by a city employee and neighbor. Her condition was unknown at press time Tuesday. Photo by Jeremy Pittari

A city of Picayune public works employee and a neighbor may have saved a teenage girl’s life when they noticed a house was on fire Tuesday morning.

Picayune Fire Marshal Pat Weaver said the city employee, identified as Stanley Hart, was passing by 1108 Merrydale Drive when he noticed smoke coming from the home and heard someone knocking behind a window on the front of the residence. A neighbor by the name of Mark Jones was also at the home at the time and heard the girl inside and was attempting to provide assistance, the fire marshal said.

Weaver said that he was told the city employee called the fire in to dispatch at about 11:14 a.m., before the city employee and neighbor used a cinder block to break out the window and helped the girl escape the smoke filled home.

Weaver said the girl, who is 15, told first responders that she was asleep in the home when she woke to find smoke filling her room. She was later transported by helicopter to a hospital in the New Orleans area, he said. Her condition is unknown.

Initial investigation into the cause of the fire shows it could have started near the stove, Weaver said. Damage to the home mostly occurred in the area of the kitchen, and while it could be repaired, Weaver said it is not livable at this time.

No one else was in the home at the time of the fire, Weaver said.

Children and pets should not be left in vehicles