City of Picayune employee recognized for rescuing girl from fire 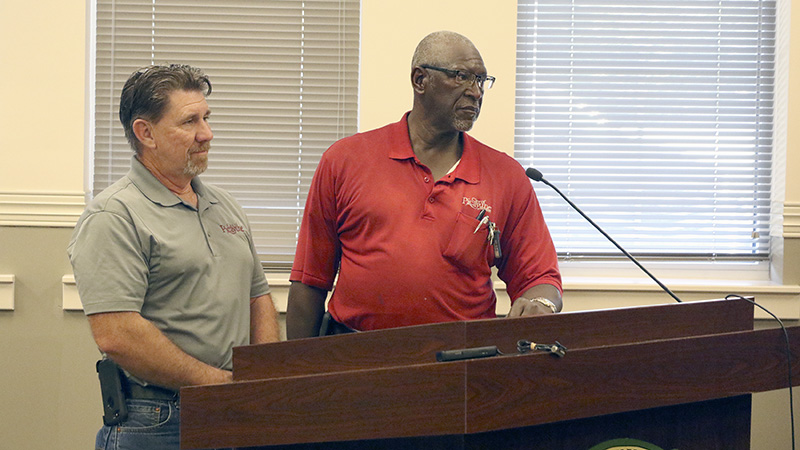 LIFE SAVER: Stanley Hart, at right, an employee of the city of Picayune, was recognized by Picayune’s City Council during Tuesday’s meeting for his efforts in helping a 15-year-old girl escape her burning home earlier this month. He is joined by Public Works Director Eric Morris, who described Hart as one of his best employees. Photo by Jeremy Pittari

A city of Picayune employee was recognized by the City Council for his role in the rescue of a girl from a house fire earlier last week.

On June 11, just after 11 that morning, Stanley Hart, an employee with the Picayune Public Works Department, was checking on various job sites in the city when he noticed a large amount of smoke was coming from a home on Merrydale Drive. He stopped to call 911 and then, with assistance from a neighbor, broke out a window to help a 15-year-old girl escape from the smoke-filled room in her home caused by a fire in the kitchen.

Tuesday, the Council took a moment to recognize Hart for his quick thinking. Public Works Director Eric Morris said that Hart is one of his best employees, saying he has a strong work ethic and the only thing he puts before his family and job is God.

Morris said that when he asked Hart if he would be alright with the Council recognizing him in public, he said that he thought he could because he was only doing God’s will.

Hart then thanked the city for providing him with a job, and his parents for raising their 17 children to be the people they are today.

In other business, the Council approved a motion to accept a $25,000 grant from the Mississippi Department of Environmental Quality so the city can hold a hazardous waste collection day. Grant Administrator Christy Goss said a date for the day has not been set, but there was some money left over from last year’s collection day that can be used for this year’s event. The city will be required to pay a 20 percent match of the cost to dispose of the total hazardous waste collected, which will be cut off at a limit based on funding.