Suspect shot dead after fleeing from, shooting at deputy 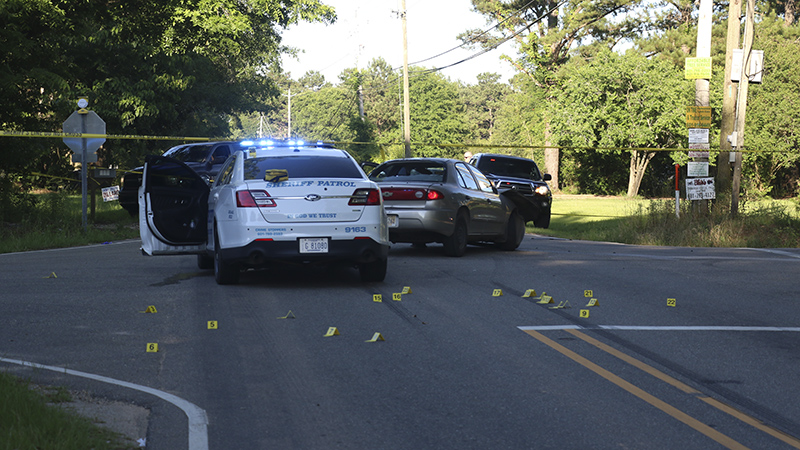 SHOTS FIRED: Markers litter the scene where a Carriere man shot at a deputy after crashing into vehicles while attempting to elude capture Thursday afternoon. Photo by Jeremy Pittari

A Carriere man was shot and killed after fleeing from and shooting at a Pearl River County deputy Thursday.

Sheriff David Allison said the chase occurred Thursday afternoon after deputies received a call that a man was making suicidal threats and was armed. The responding deputy saw the man, later identified as 28-year-old Adam McCoy of Carriere, traveling down White Chapel Road at about 3 p.m. McCoy fled and a pursuit ensued that brought the chase down Anchor Lake Road.

After the crash, McCoy allegedly fired at the deputy, who returned fire, striking McCoy. The man was later pronounced at the hospital.

Allison said the deputy and occupants of the other vehicles were not injured in the collision or by the gunfire.

“I want to thank the good Lord that the deputy is home safe with his family,” Allison said.

Investigators with the Mississippi Highway Patrol and Mississippi Bureau of Investigations were notified of the incident and have since taken over the investigation. Chase Elkins with MHP said the scene was still being investigated as of Thursday evening so additional information pertaining to the number of shots fired or if the deputy would face charges is unavailable at press time. Elkins said that all evidence collected will be presented to the 15th District Attorney’s office for review once the investigation is complete.

Allison declined to release the name of the deputy involved.