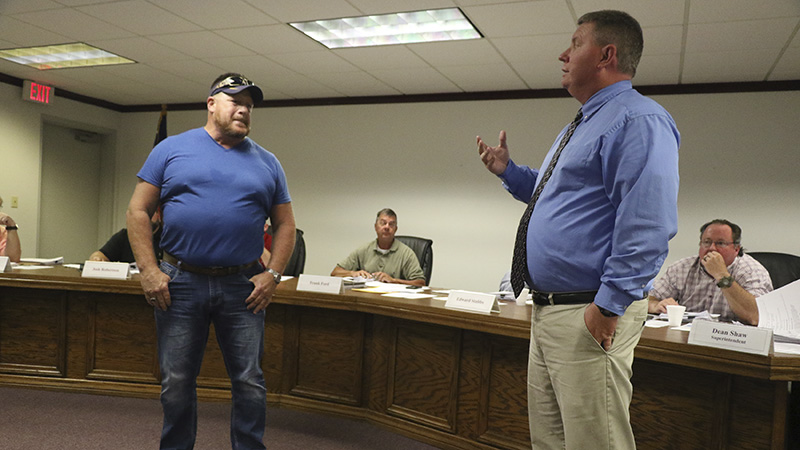 TOP NOTCH: Ray Lossett, at left, was recognized during Tuesday’s Picayune School District Board of Trustees meeting for his many accomplishments. At right, Athletic Director Walt Esslinger tells the Board about Lossett’s work to promote swimming as a sport in Mississippi. Photo by Jeremy Pittari

According to a legal that ran in the Item prior to the meeting, the District is considering an increase in the ad valorem tax. The legal states that for the current school year, the District operated off of an annual budget total of $35.4 million, of which $8.7 million came from ad valorem taxes. In the coming fiscal year, the projected budget revenue is $34.9 million, of which $8.9 million would come from local taxes.

District Finance Director Lisa Persick said the District operates off of a combination of local, state and federal funds.

Rogers said her objection is based off of her view that the students or staff will not benefit from the increase, only the District’s administration will.

Board of Trustees President Frank Ford said that in his four years on the Board, he has never voted for a tax increase.

Persick added that the District is capped at 55 mills, so a tax increase can’t be requested, but rather the District asks for a dollar amount, and the city of Picayune and Pearl River County Board of Supervisors have to determine if the area’s millage combined with current property values will provide that level of funding.

Miramon said that her concern is for people on fixed incomes, especially widowed senior citizens who can’t afford to cover additional taxes.

Rogers also condemned the fact that top-level administrators, such as the superintendent, make as much as they do.

No action was taken on the budget during Tuesday’s meeting.

In other business, the Board recognized long time swim coach Ray Lossett. Athletic Director Walt Esslinger said that Lossett has been teaching the high school’s swim team for the past 12 years, and in that time has done a lot to promote swimming as a sport in the state. His accomplishments earned him the title of Mississippi Swim Coach of the Year in 2017. When asked, Lossett said there are about 250 swim coaches in the state, and he doesn’t take a salary as a coach.  He added that of those past 12 years, a salutatorian or valedictorian from each graduating class from the past 11 years was on his swim team.

“We really push the scholastic part too,” Lossett said.

More on Tuesday’s budget hearing and regular Board meeting, will follow in the Item.