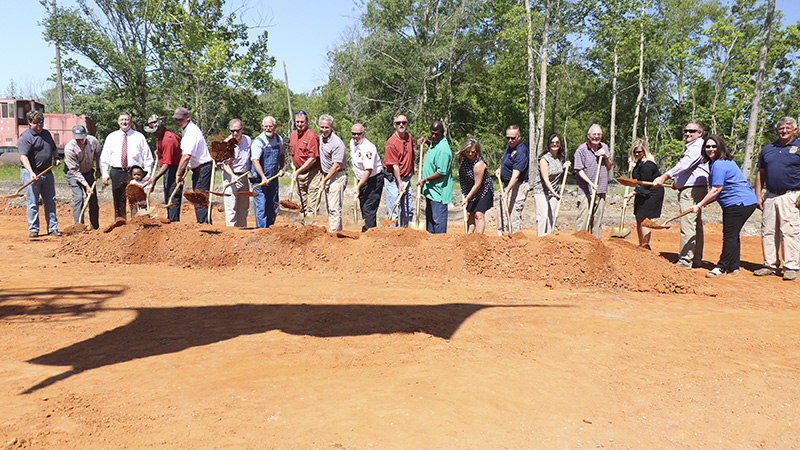 SHOVELS READY: State and local elected officials, city employees and community members gathered at the end of Goodyear Boulevard Friday morning to hold a groundbreaking for a new fire station that will be built there. Photo by Jeremy Pittari

At the end of the very street where City Manager Jim Luke said Picayune was born, ground was broken for a new fire station.

The 2,800-square-foot station is being built at the end of Goodyear Boulevard, the same street were City Hall now stands, the first football game was played in the city and where the Pearl River Valley Railroad station used to operate, Luke said. In fact, the new station is being built on the exact spot where Pearl River Valley Railroad built two stations, a two story version in 1918, which was replaced with a one story version in 1970. Last year, after assuming ownership of the property from the Mississippi Secretary of State’s office, the city tore down the abandoned one story building to make way for a new fire station that will replace the aging one on Palestine Road.

The new station will feature four bunks, a day room, kitchen, truck bay and other amenities for three firefighters that will be stationed there.

Before it became obsolete, locally produced goods such as timber, tung nuts and even passengers were transported from the now demolished station, according to coverage by the Item back in 1970.

A new fire station is needed because the current station is plagued with numerous problems; the flat roof leaks, it’s cramped and it sits on 16th section land, said Fire Chief Keith Brown.

As Brown, Luke and the City Council began looking for a place to build the new station, the property at the end of Goodyear was mentioned by Luke and Councilor Wayne Gouguet. When it was determined the state owned it, Luke said he worked with State Senator Angela Hill to ask the state to turn it over to the city. Luke said that transfer occurred at no cost to the city.

The entire property entails 21 acres, but 19 of those acres are in swampland, Brown said. The remaining two will be home for the new fire station. And due to the site’s history as a train station, an inoperable diesel engine still sits on the site. There are no concrete plans for that piece of equipment at this time, but Luke said some discussions are taking place.

Construction is still at least a couple of weeks out. Brown said the city, architect and contractor have a preconstruction meeting to hold before the city can issue a notice to mobilize to the contractor, Dennis Collier Construction.

The fire chief expects city employees to be done with the dirt work by Monday and once the notice to mobilize is issued to the contractor, Brown said the contract allows for 180 days to complete the building.