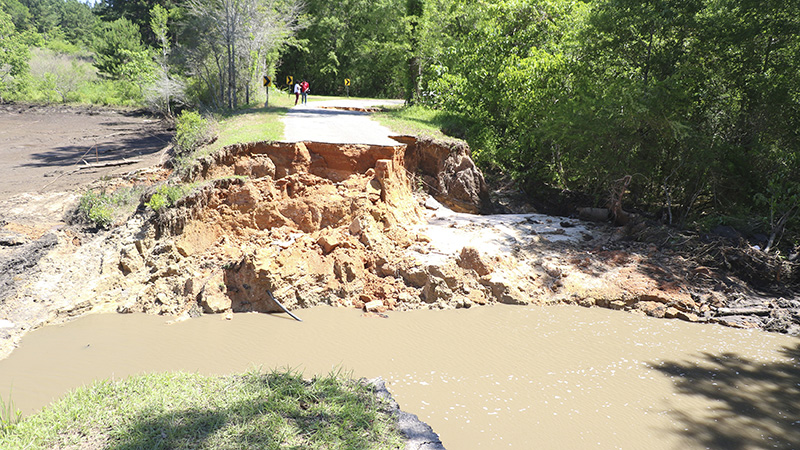 This section of County Farm Road was washed away by fast moving water dumped by heavy rains on Saturday. Dozens of people had to be rescued from swift water over the weekend. Photo by Jeremy Pittari

Emergency crews had a busy weekend dealing with heavy rainfall that brought about flash flooding that caused several people to be rescued from swift water.

Deputy Director of the Pearl River County Emergency Operations Center Shawn Wise said that as of Monday morning, all swift water rescue operations concluded, with as many as 30 calls being responded to over the weekend. During Saturday’s rain event, the north end of the county received about 16 inches of rain, while the south end received about 9 inches, according to data from the National Weather Service.

The most severe rescue involved two men and three dogs that got stuck on McNeill McHenry Road near the Wolf River. Wise said the men drove around a barricade alerting them to flood waters and attempted to traverse the flooded road, but the vehicle began to float and eventually got stuck. While they were fortunate to end up in a spot where they could be rescued, crews attempting rescues using high water vehicles were unsuccessful. Then a swift water boat crew was called in, but the conditions were too severe. Wise said estimates state the water was moving about 20 to 25 miles per hour, so it took a Coast Guard helicopter crew to rescue the men and canines. Coordination with the National Weather Service provided the Emergency Operations Center with information concerning how high the water was rising, so they knew they only had a small window of time to get the men and dogs out of the situation.

Wise said that by about 4 a.m. Sunday, they were safe. Wise said local emergency responders worked with members of the State Search and Rescue Task Force teams from Gulfport and Hattiesburg to conduct the swift water rescues. Each team worked a 24 hour shift over the weekend until rescue operations were suspended at 8 a.m. Monday.

County resident Jackie Hinton said she would like to thank the rescue crews who saved her 87-year-old mother and her caregiver from the Whitesand Road area when flooding threatened her mother’s home.

According to a press release from Chase Elkins with the Mississippi Highway Patrol, just before 10:30 Saturday morning, flooding south of the intersection of Highway 26 along Interstate 59 caused an 18 wheeler to stop in the northbound lane. At that time, a 2010 Toyota Corolla driven by 28-year-old Devyn James Killion of Poplarville, collided with the rear of the 18 wheeler. Killion was pronounced at the scene. He was wearing a seatbelt at the time of the collision, the release states. The driver of the 18 wheeler was uninjured.

An accident in the south bound lane occurred at about the same time near the 38 mile marker of the Interstate, also due to flooding. Pearl River County Sheriff’s Department Chief Deputy Shane Tucker said that deputies were sent to that area after a 2015 Harley Davidson trike operated by a 38-year-old unidentified man attempted to pass through backed up traffic. As he did, he struck three vehicles before the trike went into a spin and got stuck under the trailer of an 18-wheeler. Tucker said the man, who was wearing a helmet at the time, suffered moderate injuries and was transported to an area hospital for treatment.

About 60 people took refuge in the emergency shelter next to the EOC headquarters in Poplarville at various times over the weekend. At one point, about 20 people were in the shelter at one time until family members or friends could pick them up and take them to other accommodations, Wise said. Representatives with the American Red Cross were providing assistance at the shelter.

Wise is asking the public to report any instances of damage to homes, businesses or agricultural operations as a result of this weekend’s storm. That information is requested even if the home, business or farm owner has insurance because it will be used to determine if the county qualifies for federal assistance.  Field teams will then be sent to those areas to determine if the damage falls in one of four categories.

“We can’t help them if we don’t know they’re affected,” Wise said.

Tucker said the Department’s dispatchers did an excellent job of handling the large number of calls, most of which were for swift water rescues and road closures. “I can’t say enough good about our dispatchers, they did an outstanding job Saturday,” Tucker said.

Picayune Deputy Fire Chief Barry Lee said no homes in Picayune flooded as a result of the rains.