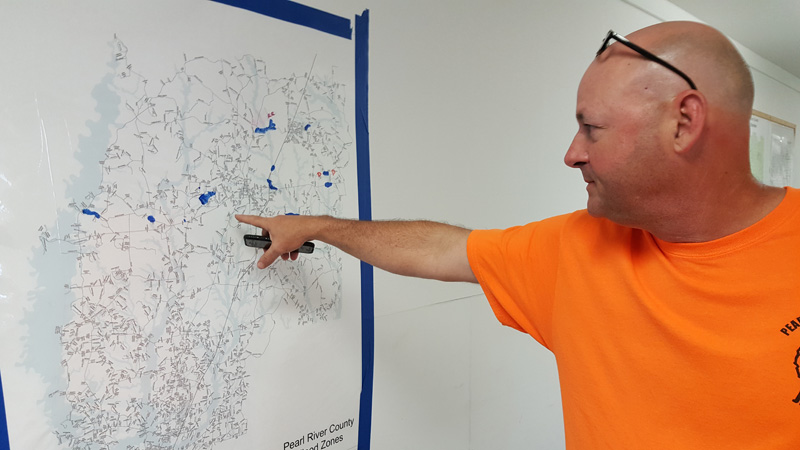 Pearl River County Emergency Management Director Danny Manley points to a map denoting the flooded roads in the county due to heavy rains that fell Saturday. Photo by Jeremy Pittari

(Update) This story has been updated to reflect the name of the deceased.

Heavy rains that fell Saturday caused flooding in several areas of north Pearl Rive County, was indirectly involved in at least one fatal accident and caused about 20 instances of people having to be rescued from rising waters.

Shawn Wise, Deputy Director of the Pearl River County Emergency Operations Center, said that as of 3 p.m. Saturday volunteer fire fighters and other emergency responders worked at least 19 instances of people needing to be rescued from rising waters. He expects that number to increase. Anyone who needs shelter due to being displaced by the flooding can find shelter at the Poplarville Emergency Storm Shelter next to the EOC headquarters at the intersection of Highway 11 and Highway 26. Those seeking shelter are asked to check in at the EOC office first.

Motorists are asked to stay home if at all possible and restrict travel to emergency situations, Wise said.

Emergency crews also worked a train derailment in the area of the Hillsdale community Saturday morning. Norfolk Southern personnel are evaluating the situation to determine the cause, but Wise said a preliminary cause of the derailment was due to waters damaging the tracks. Wise said there were no injuries in the derailment, and the train was not carrying hazardous material.

According to press release from Chase Elkins with the Mississippi Highway Patrol, just before 10:30 Saturday morning, flooding south of the intersection of Highway 26 along Interstate 59 caused an 18 wheeler to stop in the northbound lane. At that time a 2010 Toyota Corolla driven by 28-year-old Devyn James Killion of Poplarville, collided with the rear of the 18 wheeler. Killion was pronounced at the scene. He was wearing a seatbelt at the time of the collision, the release states. The driver of the 18 wheeler was uninjured.

Wise said that flooding along Highway 26 near Gator Creek has caused that road to be closed. Manley said a number of other roads were also closed due to flooding, and cautions people to not drive through the water since the asphalt could be washed out underneath.

The following is a statement from the Pearl River County Utility Authority.

“PRCUA received multiple calls for a loss of water pressure in the Lake Hillsdale area around 8am this morning.  Our water operator responded and found a major break on a water main along Glendale Drive due to an apparent lighting strike of a nearby pine tree. Repair crews had trouble gaining access due to flooding. Approximately 70 customers were without water pressure until about noon.  A boil water notice has been issued for all PRCUA customers in the Lake Hillsdale area until further notice.  Residents should check our website for updates.”

This story will be updated as more information is released.

Work to straighten out Highway 43 North will lead…