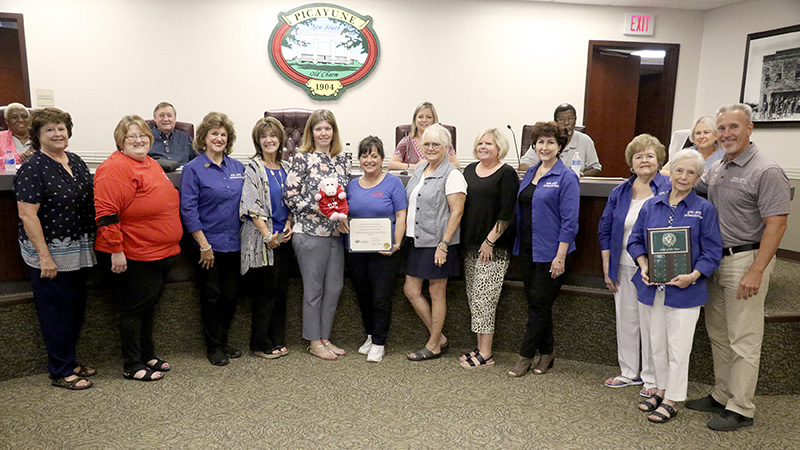 TOP IN THE STATE: Picayune’s City Council recognized the Civic Woman’s Club for being named the Club of the Year within Mississippi by the General Federation of Clubs-Mississippi Federation of Women’s Clubs. Photo by Jeremy Pittari

In other business, the Council approved a motion to relocate a slide and swing set at Mildred Mitchell Park.

Public Works Director Eric Morris said the two pieces of equipment will be moved from their current location on Daniels Road to the park’s recent addition on Highway 43 where another piece of donated equipment was recently installed.

Morris said the equipment is being moved so all playground equipment at the park is in one location, preventing children from having to cross Daniels Road to utilize all three pieces of equipment.

The old location will be converted into parking space for the park by using cross ties and other materials already on hand. Morris said the only expense the city will incur is that of payroll to city employees.

At the end of the meeting, Woods subdivision resident Cathy Hegwood spoke to the Council about an issue she is having with a house next to hers. She said the home has been unoccupied for at least four years and is infested with termites. That infestation spread to her own home, forcing her to have to spend more than $20,000 in repairs to the front of her home.

According to her, the property has been declared a public nuisance by the Council during a prior meeting, but nothing has changed since. She’s asking the city to demolish the house.

Mayor Ed Pinero asked City Manager Jim Luke to meet with Hegwood to see what can be done about the property from the city’s standpoint.

The next meeting of the Council will be June 4 at 5 p.m. in City Hall.

Board of Aldermen discuss road construction and cemetery maintenance