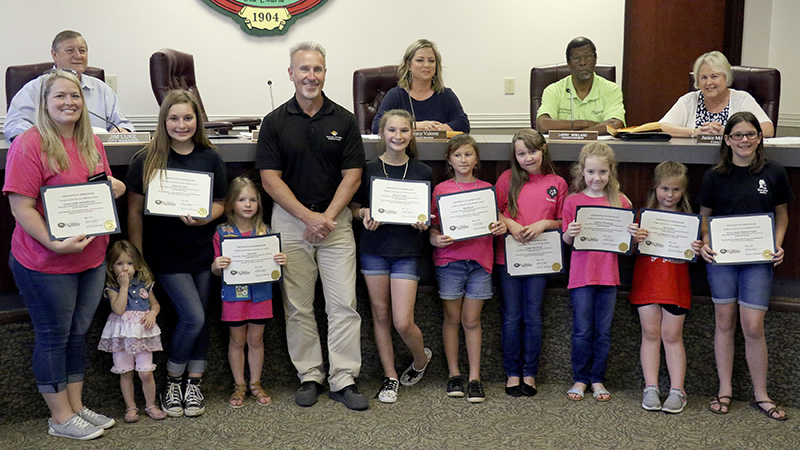 RECOGNITION: Members of Girl Scout Troop 6924 of Pearl River County were recognized by the Picayune City Council during Tuesday’s meeting for their efforts to help make the city beautiful by assisting city employees with flower bed maintenance. Photo by Jeremy Pittari

Reducing speed limits in certain areas of the city was discussed by Picayune’s City Council during Tuesday’s meeting.

One issue at hand involves complaints of speeders in the area of West Canal Street, particularly during hours when the dance and martial arts studios are in operation.

Public concerns involve the potential for children to be hit by vehicles, especially when motorists drive too fast in that area.

During Tuesday’s Council meeting, Picayune Police Chief Bryan Dawsey presented the suggestion of changing the speed limit along West Canal Street, specifically from the intersections of Quince Street to Church Street, from 20 miles per hour to 15 during the hours of 3 to 8 p.m. Dawsey said the suggestion is being made due to the amount of drivers speeding through the area combined with an incident last year that involved a child being struck by a vehicle.

Councilor Janice Stevens said she has a granddaughter who attends a dance class in that area, and has noticed a problem where motorists fail to slow for the children.

Councilor Wayne Gouguet asked if there was an alternative solution in case changing the speed limit does not work. The only other solution offered, Dawsey said, was to create drop off points at the rear of each business. However, the business owners determined that there is not enough space in the rear of their locations to establish drop off points. Dawsey said he feels reducing the speed limit should have some effect.

City attorney Nathan Farmer suggested the installation of speed bumps in that area, while Councilors Larry Breland and Lynn Bogan Bumpers both said speeding occurs in residential areas within their precincts as well.

But the bigger issue is enforcing any change that is made. When the Council asked how that aspect of the change would take place, Dawsey said that he could post officers in that area for a short time and have them issue warnings for a temporary period immediately after the change. However Mayor Ed Pinero said that since speeding is a city-wide issue, and officers have a plethora of other responsibilities, it would be difficult to give up the manpower just to watch one intersection. Dawsey said when he receives complaints of speeding, he will dedicate an officer to target that area for a time.

Discussion of reducing the speed limit in residential areas adjoining Picayune Memorial High School also took place during Tuesday’s meeting for the same reason, speeding. Those areas include Third Avenue, Fourth Avenue and Fifth Avenue and entail reducing the limit from 30 miles per hour to 20. Dawsey said there are school zones in those areas, and added that most subdivisions in the city already employ 20 mile per hour limits during all hours.

No action was taken on either matter but the information presented was taken under advisement.

— Approved a motion to send City Manager Jim Luke to Little Rock, Ark., from Sept. 8-12 to the ROCIC 29th Annual Homicide Conference so he can keep his certification as a law enforcement officer.

— Approved a motion to advertise for bids for road improvement work along Stafford Road.

— Approved a request to send Capt. Raymond Rickoll to attend the IAPE Property/Evidence Management Class  on June 11 and 12 in Birmingham Ala.