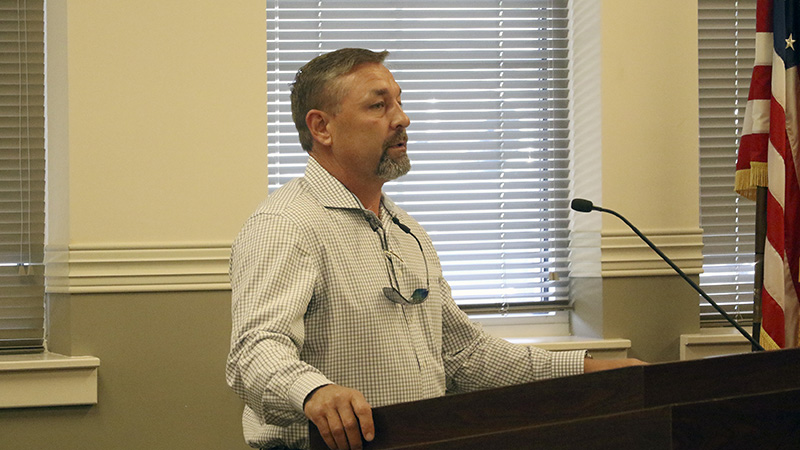 PETITIONING THE COUNCIL: Gus Bordelon with Coastal Environmental Services speaks to the Picayune City Council to request an increase of .46 per customer per month to compensate for rising costs to perform recycling services. Photo by Jeremy Pittari

Due to the increasing cost of recycling waste that can be reused, the owner of Coastal Environmental Services petitioned Picayune’s City Council for a rate increase.

Gus Bordelon, owner of Coastal Environmental Services, addressed the Council during Tuesday’s meeting to request a .46 increase per household per month to help with the rising costs of recycling that Bordelon said were in part due to recent tariffs being levied to China by President Donald Trump, which used to be the major buyer of recycled goods from the United States.

The tariffs, combined with other factors, have led to an increase in the expense to transport and properly recycle such materials. Bordelon said a company he previously worked with out of Baton Rouge, La. increased the rate he is charged from $65 per ton with transportation costs to an estimated $167 per ton.

As a partial fix, his company has begun working on an agreement with another company out of Sumrall, Miss. to get a better rate even though it is 26 miles further.

He feels that by working with the new company, and with the rate increase, his company won’t have to absorb the losses for the foreseeable future as he has been doing. The city of Picayune is in its first year of a contract with Coastal Environmental Services.

Some other issues his company has been working to address include improper materials being put in the bins. Currently, the recycling participation rate for Picayune residents is about 39 percent of the nearly 4,200 homes his crews service here, up from the rate of 20 percent when his company took over the waste collection contract. For comparison, the participation rate in cities within St. Tammany Parish is about 68 percent. In that area, he has requested an increase of $1.68 per household per month due to the increased participation rate.

As an alternative, he said the city of Picayune could consider stopping the curbside recycling collection service as has been done in Jefferson Parish and New Orleans.

No action was taken on Bordelon’s request during Tuesday’s meeting.