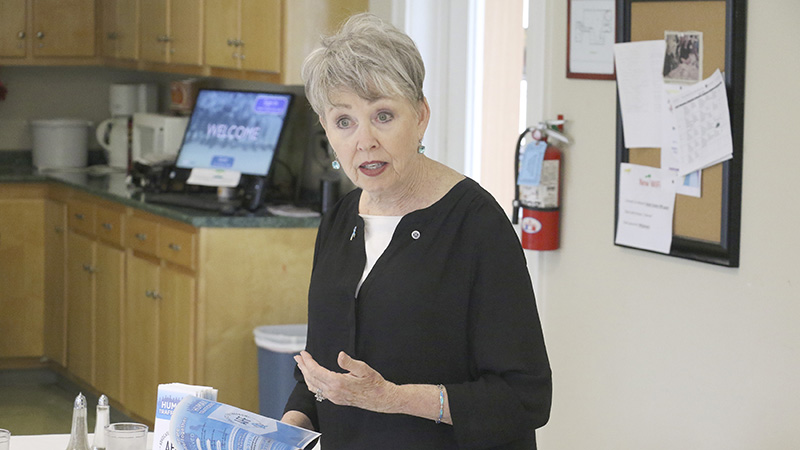 EDUCATING THE PUBLIC: Susie Harvill, CEO and co-founder of Advocates for Freedom speaks to members of the Exchange Club of Picayune about human trafficking and the effects it has on the victims. Photo by Jeremy Pittari

Human trafficking comes in two forms and is prevalent across the world, including Mississippi.

That was the message shared with members of the Exchange Club of Picayune this week when Susie Harvill, CEO and co-founder of Advocates for Freedom gave a presentation on the issue.

She said the two forms of trafficking include labor and sex and both entail forcing someone to do things they normally wouldn’t through a long period of abuse.

Her organization aims to not only bring awareness to the issue, but share tips on how to recognize human trafficking so it can be reported.

Harvill said the trend has recently changed from stealing children from other countries to the United States to stealing children born in this country because the cost is less and they already know how to speak the language.

“Our kids are the hottest commodity,” Harvill said.

In America sex trafficking is more prominent than labor trafficking and the Interstate 10 corridor is the major route where it occurs and Atlanta, Ga., is the main hub. Culprits will typically use force, fraud and coercion to get their way.

She added that children are often taken in public places, especially if they are left alone.

“If you love your kids don’t send them to the mall by themselves,” Harvill said.

Culprits of this crime keep their victims in check by creating a sense of shame and using threats of force against their families. Another tactic includes moving them to a new area of the country frequently.

Victims who fall into sex trafficking are often told that they need to work enough to make $1,000 a day. A “pimp” with five children is said to be able to make more than $1 million annually in this state, she said.

These operations can be working out of a fake storefront, a hotel room and even typical looking homes in upscale subdivisions.

Harvill trains local law enforcement agencies how to spot signs of sex trafficking and how to respond. Some signs include high security measures in the work including boarded up windows, the child acts fearful, tense or nervous, has few personal possessions, displays a loss of time, lack of knowledge about the town they are in and is not allowed to speak for him or her self.

Law enforcement agencies seeking training, or organizations who would like Harvill to speak to them about human trafficking can call 228-806-3492.