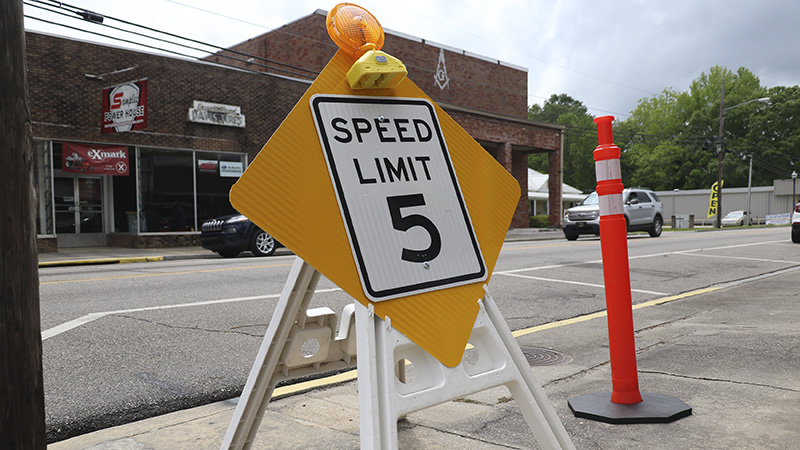 TEMPORARY SOLUTION: This sign is used along West Canal Street in Picayune to alert motorists in that area that children are crossing the street to reach dance and martial arts classes. Photo by Jeremy Pittari

During the past several weeks, a section of West Canal Street has been limited to 5 miles per hour.

City Manager Jim Luke said that change was made recently at the request of concerned parents who bring their children to dance and martial arts classes in that area.

He added that about a year ago a child was struck by a vehicle in that area and that child suffered a brain injury as a result. A recent resurgence of parent complaints prompted the city to put up a temporary sign indicating the speed limit is reduced while the classes are in session. That zone is from the intersections of Quince Street and Church Street along West Canal Street, Luke said.

The decision to implement that change was based off of observations of traffic in the area. During that time, the city’s personnel noticed a number of small children being forced to cross the busy street in the middle of traffic to get to the classes, Luke said.

However, state law says that a limit in any given area can’t be limited to a speed less than 15 miles per hour on a permanent basis, Luke said. As such the Picayune Police Department was tasked with researching the problem and coming up with a permanent solution. Luke said he expects representatives with the department to present those recommendations during Tuesday’s City Council meeting. He said that research also entailed a section of roads along Third Avenue and Fourth Avenues due to community complaints of speeding in those areas during school hours. Luke said he suspects those motorists are attempting to bypass Goodyear Boulevard, which is limited to 20 mph during school hours.

Luke said some of the recommendations being researched included creating a loading and unloading zone at the rear of the dance and martial arts studios, but those ideas turned out to be impractical.