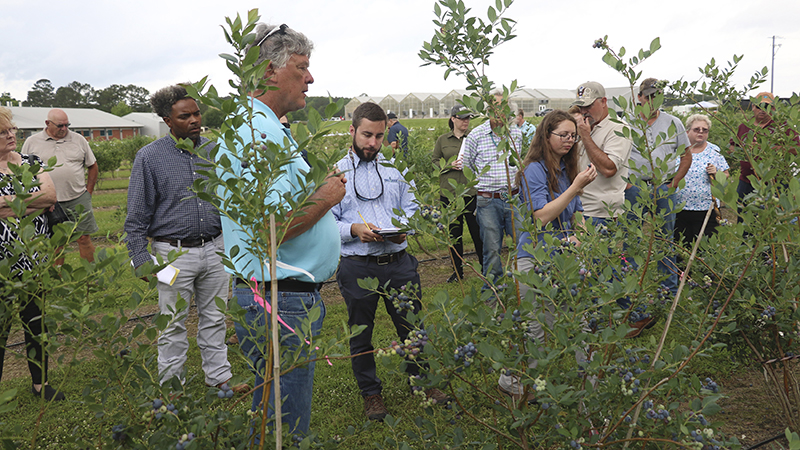 Dr. Stephen Stringer leads a group of blueberry growers on a tour of the bushes being grown at the Thad Cochran Southern Horticultural Laboratory in Poplarville. Photo by Jeremy Pittari

Blueberry growers from across the region gathered at the USDA’s Thad Cochran Southern Horticultural Laboratory in Poplarville to attend the Mississippi Blueberry Field Day.

It was an opportunity for growers to learn about the research going on at the lab and also gather information that could help them with their crops.

In the south, blueberry bushes are typically rabbit eye and southern high bush, which is a genetically modified version of the northern high bush.

Some tips provided by speakers of the event included finding a place to sell the crop, protecting plants from diseases and using effective pollinators.

Don van de Werken, with the Gulf South Blueberry Growers Association, had one tip for the attendees.

“If you don’t know where you will sell your berries, don’t grow them,” van de Werken said.

He suggested they could find a farmers market, grocery store or establish a “you pick” business model where customers pick their own berries.

Dr. Blair Sampson with USDA ARS in Poplarville spoke about effective pollinators, which can include a variety of bee species. Native chimney bees seem to be the most effective pollinations for this area and have the extra benefit of being relatively docile to humans. The only hurdle is breeding the bees in such a timeframe that they are able to leave the hive as adults by January or February so they can pollinate blueberry bushes. Honeybees can also be good for pollinating blueberry bushes, but are not the best choice, Sampson said.

Dr. James Polashock with the USDA research station in New Jersey spoke about preventing the various diseases and viruses that can affect the plants. His first tip was to start the growing process with the cleanest materials possible. That starts with finding a reputable nursery that offers clean supplies and materials. Stem blight is one such disease that can affect the plants, and he said it can be transmitted by nurseries. He also suggested the use of fungicides and insecticides, since fungs and insects can negatively affect the plants and subsequently crops.

Insects such as aphids and spittlebugs can be especially harmful to blueberry bushes. Polashock added that protecting the plants from a hard freeze is essential since it can make the plants susceptible to diseases.

Dr. Stephen Stringer with USDA ARS in Poplarville, said the variety of bushes being grown at the lab are essentially a mixed breed of northern high bush that has been interbred with a native southern blueberry so it can thrive in the environment.

Attendees were then invited to tour the field where they could see the different plants being grown and sample some of the berries.