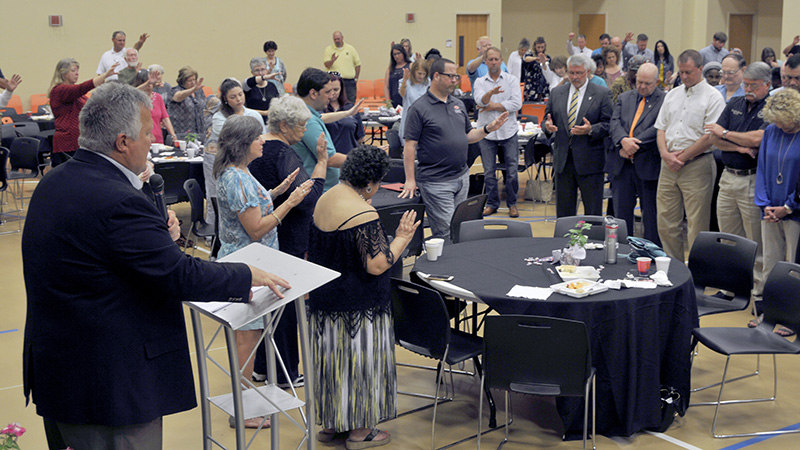 PRAYER FOR THE ELECTED: Rev. Allen Hickman of Resurrection Life Church leads a prayer over the current elected officials and those running for office this year. Photo Cathy Cook

The 2019 Mayor’s Prayer Breakfast was well attended Thursday at The Link at First Baptist Church of Picayune.

Keynote speaker Carrey Robertson, a retired Navy Chaplain, kept the audience laughing with a speech that emphasized prayer as a habit, and described South Korea as a nation that practices habitual prayer.

“If we just maintain our faith in God and God’s goodness and God’s mercy, everything’s going to come out okay,” Robertson said.

“I hope it’ll inspire people to follow the theme and love one another,” Pinero said.

The Prayer Breakfast featured six speakers, including Pinero, who offered prayers to a full room of community members and public officials. The prayers focused on the breakfast’s theme: love. The speakers’ messages touched on coming together in prayer in a divided nation, the power of loving one another and on the power of prayer.

After the series of prayers, Rev. Allen Hickman of Resurrection Life Church asked all public officials and everyone running for public office to stand at the front of the room. Then the attendees stood, raised their arms and joined him in a prayer over public officials and candidates. His prayer asked God to give the officials strength and included a request that God eliminate abortion from the nation.

In between prayers, the audience joined in singing songs praising God. The audience was also asked to stand and recite the Lord’s Prayer along with the speaker.

Many members of the community were present including city employees and religious leaders.

Attendees seemed satisfied with the prayers offered to them.

Gladys Cruz said she believes the event is important because she does not think politicians have God in their heart.