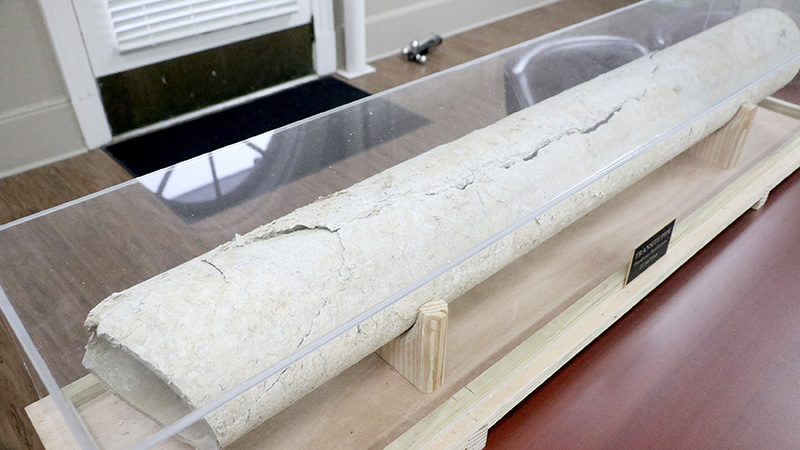 Pictured is an example of transite water mains, which are starting to decay. Photo by Jeremy Pittari

Work to repair failing water lines in the city of Picayune will mean intermittent service interruptions for some residents.

Public Works Director Eric Morris said the repairs are necessary to replace aging water lines throughout the city. The first phase of the project will kick off in the Ponderosa subdivision within the next week or two. Crews are currently working on installing water service to an area of the city that currently has none, which is along Highway 11 South near Quick and Grice near the city’s Industrial Park.

Once that work is complete, the crews will move on to replace the aging transite lines that are currently serving residents in Ponderosa. Two other areas of the city will also be part of phase one to replace water lines with more modern variations. Transite was a concrete based substance popular back in the 1960s and 1970s.

Morris estimates the lines were installed more than 30 years ago, and are now becoming brittle, which can lead to leaks.

Those aging lines will be removed and replaced with a polyurethane based pipe called C900 that has a much longer lifespan.

Morris said the new lines could last 50 years or more.

When the work starts in a residential area, residents can expect service interruptions.

Water mains and the lines leading up to water meters at each home will be replaced in the work, Morris said.

Replacement of the lines in Ponderosa is expected to take about 90 days, weather and unforeseen issues permitting. Once service is restored, residents can expect boil water notices to follow.

Other areas of the city planned to receive water line replacement work in this phase include the area of Telly Road to East Canal and from the East Hobolochitto Creek north to Highland Drive off of Stemwood Drive.