Supervisors team up with local artist, LPRVF to print book 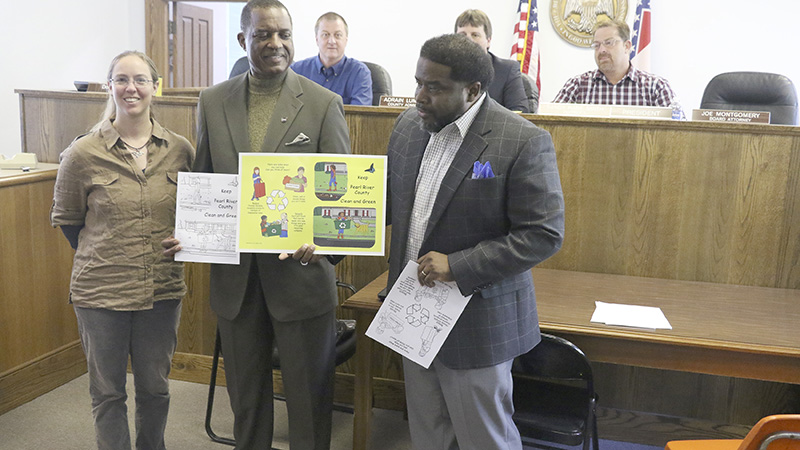 READY FOR STUDENTS: From left, local artist Abby Chatelain, Clyde Dease with the Lower Pearl River Valley and District I Supervisor Donald Hart show off a new coloring book that will be provided to area students in an effort to deter littering. Photo by Jeremy Pittari

Cleanup efforts over the weekend, a local coloring book deterring littering and updates to road and bridge repairs were discussed during Monday’s Pearl River County Board of Supervisors meeting.

Board President Sandy Kane Smith started the meeting by saying the countywide cleanup event held Saturday was a success, bringing in a larger turnout than the previous two years. Smith said he was also pleased to see young people attend the event representing their respective groups, such as the Pearl River Central High School NJROTC. In addition to the various litter picked up during that day, Smith said crews collected about a trailer load of tires during the event.

Soon, a coloring book that will teach children about litter will be provided to every student in Pearl River County. District I Supervisor Donald Hart said the idea for the local version of the coloring book came about after he saw one of his neighbors, Abby Chatelain, picking up trash on a daily basis. When he spoke with Chatelain about her efforts, he learned that she is an artist. His previous research to provide generic anti-litter coloring books to area children soon turned local when she agreed to provide the artwork based on locales within Pearl River County. Now the book is ready for printing with funding from the Lower Pearl River Valley Foundation.

County Administrator Adrain Lumpkin said 10,000 copies will be printed, which will be enough for each child attending the three school districts in Pearl River County.

Hart said he has already secured permission from all three superintendents to provide the children with a book.

During discussion of Sheriff’s Department matters, Sheriff David Allison mentioned to the Board that there are several patrol vehicles in his department that need to be replaced. A number of them have more than 200,000 miles and those that transport K-9s run the entire length of a 12 hour shift for the comfort of the dogs. Allison said that funding needs to be found to replace those aging vehicles. No action was taken on the matter during Monday’s meeting.

Charlie Schielder also updated the Board on the condition of the two road department employees who were struck by a vehicle a couple of weeks ago on Jackson Landing Road. He said that one of those men is already back at work, but the second is waiting for MRI results to determine if he will need surgery.

District IV Supervisor Farron Moeller asked if there is a way that an off duty deputy could stage up at sites where road maintenance is ongoing, especially in areas where traffic is high.

Allison said he can provide a deputy as much as possible if the Board lets him know when one is needed.