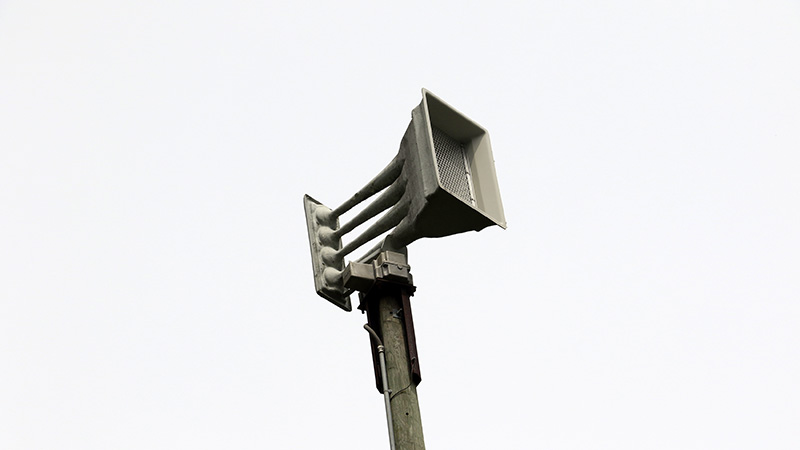 TESTING, TESTING: All five sirens like the one pictured will undergo a test today to ensure they are operational before the start of hurricane season. Testing will continue on a monthly basis during days with clear weather. Photo by Jeremy Pittari

Residents in the city of Picayune may hear a loud siren at about noon today.

Fire Chief Keith Brown said that sound will only be a test to ensure the emergency sirens located throughout the city are in working order before the start of hurricane season.

The five sirens were installed in the city limits using grant funds in 2008, and were initially property of the county. However, the Council approved a motion to accept ownership of them back in December of 2015.

Ever since, the city has been maintaining them and using them to alert the public when a potential hazard is imminent.

Today’s test will start at noon and last about three minutes. Brown said that as soon as they confirm the sirens work and they rotate a full turn, they will be shut off.

There are five sirens located throughout the city. One is located at Fire Station 1 on Adcox Road, another is near Frontage Road, a third is near the stadium at Picayune Memorial High School, the fourth is on Beech Street near the intersection of Jackson Landing Road and the fifth is located on the Nicholson Elementary campus.

They were placed on or near school campuses because the grant required it, however when they were installed city personnel used a map to determine areas where not only children and staff in schools could hear them, but as many of the residents as well.

They operate via a remote connection with the dispatch at Picayune Police Department and utilize a 12 volt battery to ensure they are operational when the power is out, Brown said.

Tests are typically coordinated with the schools so staff and students can conduct tornado drills.

Information used to determine when to activate the sirens during a storm-related emergency typically come from the National Weather Service. While that agency may issue a tornado warning for parts of Pearl River County, Brown said it is up to city personnel to determine if that threat is for Picayune, or some other area in the county.

“We do the best we can to try to decipher the information we get from the National Weather Service so we only activate them when there’s imminent threat to Picayune,” Brown said.

Continued tests will take place about once a month on clear days.