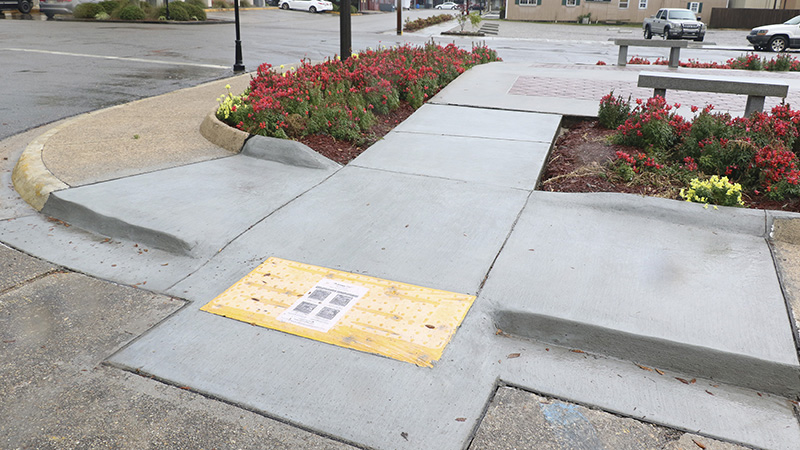 RAMPED UP: Sidewalks along Goodyear Boulevard have been repaired and converted to be compliant with Americans with Disabilities Act regulations., including wheelchair ramps. Photo by Jeremy Pittari

Several sidewalks along Goodyear Boulevard have been repaired and upgraded to make them compliant with Americans with Disabilities Act regulations.

City of Picayune Public Works Director Eric Morris said the work had to be conducted utilizing city funding because grant funding for sidewalks is not readily available.

The work aimed to not only repair sidewalks, but also focused on installing wheelchair ramps and other improvements to make them ADA compliant. Morris said the work took place on Goodyear Boulevard because of the proximity of City Hall and the many other city owned buildings along that road, providing the city with the “most bang for our bucks.”

Morris said the reason the city focused on sidewalks near government buildings is due to Federal Highway Administration priorities provided to the city by the Mississippi Department of Transportation, which list priority areas in the following order; government buildings, schools, and finally, residential.

The work recently completed may be the last sidewalk repairs conducted in Picayune until next fiscal year. Morris said the work along Goodyear hit his budget hard, but he will review his department’s budget to see if funding remains to conduct additional repairs.

“I will look at what’s left and see what I can get done,” Morris said.

Construction of new sidewalks along Highland Parkway is also slated, but that funding is primarily coming from a Mississippi Department of Transportation grant. According to coverage of the Jan. 2, 2019 City Council meeting, the total cost of that project will be $198,825, of which the grant will cover $144,315. It will construct sidewalks from the intersection of Highland Parkway and Highway 11 to the entrance of Trinity United Methodist Church.