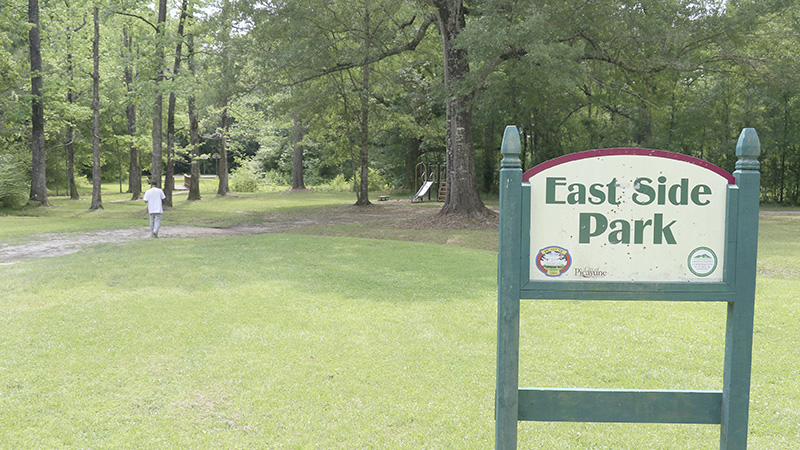 LITTLE KNOWN: This park at the end of South Abrams Avenue, which is a dead end street, was unknown to most of the people asked to serve on a committee assigned to assess the use and necessary repairs or upgrades to each city park. It features a small piece of playground equipment, large green space and a small wooden bridge that leads to a basketball court. Photo by Jeremy Pittari

Members of Picayune’s City Council heard a presentation concerning a plan to address the local parks.

According to a recording of Tuesday evening’s meeting provided to the Item, Rev. Allen Hickman stood before the Council to give his presentation based on the findings of a committee formed by Operations Director Harvey Miller.

Hickman said the findings of the committee were based on first hand tours of the parks, one on one interviews and visual observations of attendance of each.

He said that Friendship Park is the most used by far. Some of the suggestions for the park included demolishing and then rebuilding Kids Kingdom, demolition of the existing gazebo and construct four at each corner of the play area, addressing drainage issues at the splash pad and enlarging the play area’s perimeter.

At J.P Johnson Park, the next most used park in the city, the committee determined that new restroom facilities are needed, along with additional parking that is also safer and the construction of three units of age appropriate playground equipment.

“Most of our playground equipment is not up to code in all the parks,” Hickman said.

Suggestions for improving Jack Read Park included remodeling the current facilities, replace the stucco on the stage, removing the sound system and installing a ceiling on the stage to protect sound equipment brought by those who rent the area for events.

At Ben Taylor Park, the committee determined that new restrooms are needed, the parking area needs to be clearly defined to protect the children and rentable covered areas for picnics could be installed. Hickman said the committee also suggests two units of age appropriate playground equipment be constructed there. Other suggestions included renovating the basketball court and softball fields and construction of covered seating for parents watching their children at play. Hickman added that there is some issue with proper identification of the park’s property line that needs to be addressed before the bathrooms are constructed.

East Side Park at the end of South Abrams was a surprise to the committee, most of which were unaware that park existed. Hickman said the committee learned that abandoning that park is not an option due to previous grant funding used at the park. Public Works Director Eric Morris said via a phone interview that the park features a small piece of playground equipment and a small bridge that leads to a basketball court. Most of those items were recently maintained, and at this point the only expense for upkeep of that park is mowing the grass. Hickman said the committee recommends purchasing the lots adjacent to the park to connect it to the nearby street and construct walking trails by clearing underbrush.

The committee also looked at Snyder Park on Beech Street, and determined it to be the least used park in the city, thereby suggesting turning the property back over to the Picayune School District since it’s 16th Section land. The savings in that change could be used to maintain the other parks in the city.

The final park on the list was Pat Blades Park on Goodyear Boulevard. Hickman said the committee saw very few people use the park and suggested selling the land and using the savings to maintain the other parks.

After the presentation, Councilor Larry Breland asked who chose the committee members because there was not one “person of color” on it. Miller claimed ownership of the members, but added that two or three “people of color” were asked to be on the committee but declined.

Mayor Ed Pinero said the suggestions of committee are just that, and do not indicate a plan of action by the Council.