Council faces same issue with fire station bids as before 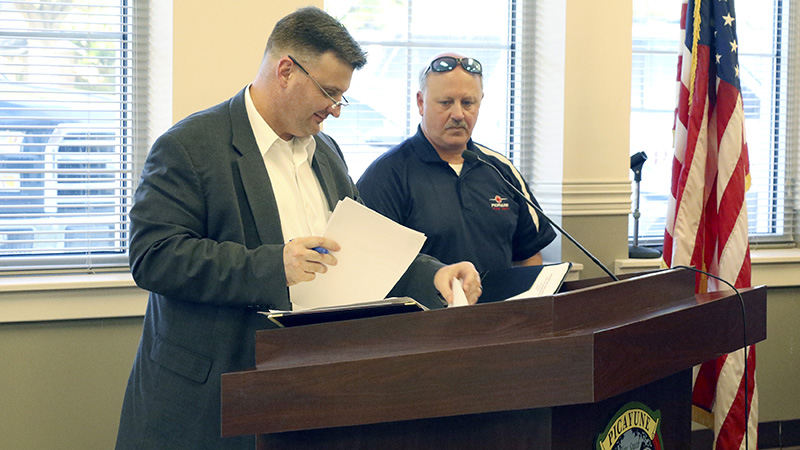 LEGAL DESCRIPTION: From left, city attorney Nathan Farmer and Picayune Fire Chief Keith Brown prepare to present findings from the March 19, opening of bids to construct a new fire station at the end of Goodyear Boulevard. Photo by Jeremy Pittari

Picayune’s City Council opted to accept the second best bid submitted in relation to the construction of a new fire station at the end of Goodyear Boulevard.

A bid from Collier Construction LLC approved in December of last year had to be rescinded in February of this year after it was determined that bid did not include a bid bond, as specified in the requirements for the bidding process when it was advertised.

Tuesday, the Council considered a set of five bids from various contractors on the same project, which were opened on March 19.

Again the lowest bidder was declined because of the same issue, it did not include the bid bond as specified in the bid requirements. This time the lowest bid, of $558,900, was from Colony Construction LLC.

City attorney Nathan Farmer said that unlike other bid requirements established by the state, the Council could opt to approve that bid even though the bid bond was submitted after the bid was opened, but was also within its rights to deny the bid on the same grounds.

At the end of the meeting, Louise Harvin and Gretchen Porter addressed the Council about an issue with their mother’s house. They said that back in July of last year, a tree on the city’s property fell on their mother’s home, causing major damage and making the home unlivable.

Harvin and Porter asked the Council for some kind of assistance so their 87-year-old mother could return to her home as she regularly requests of her children.

“When we take her to it she just cries like a 2-year-old,” Harvin said.

Mayor Ed Pinero Jr. asked City Manager Jim Luke to seek out any organization that may be able to provide assistance.

The next Council meeting will be April 16 at 5 p.m. in City Hall.