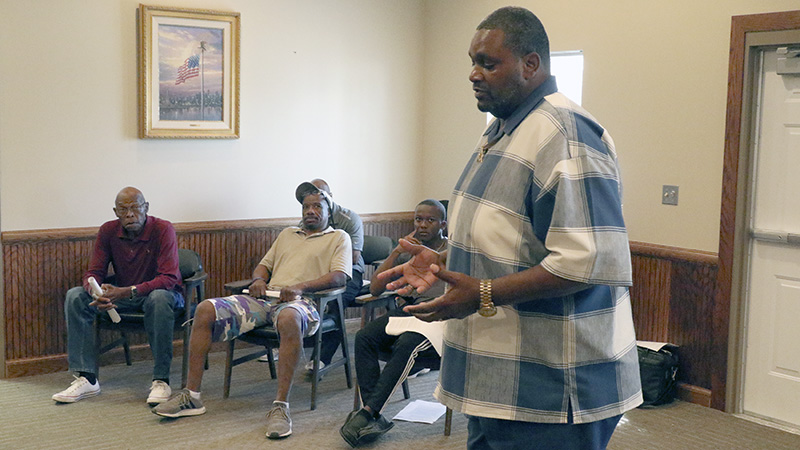 COMMUNITY CONCERNS: Rev Jimmy Richardson, president of the Pearl River County Chapter of the NAACP, addresses the Board of Aldermen about numerous complaints being lodged against the same police officer of the Poplarville Police Department. Photo by Jeremy Pittari

Several residents of Poplarville stood before the Board of Aldermen during Tuesday’s meeting to lodge complaints against the same officer.

Marvin Woody and Walter McGinty lodged complaints with the Board, saying that on several occasions officer Kimble Farmer harassed citizens of the city in one form or another. Rev. Jimmy Richardson said that he has also received complaints from members of the community about the same officer.

McGinty said that his son was allegedly harassed by the officer  on Sunday at 3:30 a.m.

McGinty said that other people have had similar complaints and it appears as though the officer is “singling out areas of the city.”

Interim Police Chief Joe Stuart said that Farmer was in that area due to a downed line due to the storm that passed through the area.

Stuart said that he plans to meet with Farmer when he returns to duty on Wednesday and review any body camera footage associated with the allegations.

Richardson said that this is not the first time he has heard allegations of inappropriate actions by Farmer. One such complaint involved the officer allegedly asking citizens in the community to “be my snitch.” Richardson added that the complaints are only allegations, but no officer should feel as though they are above the law.

Marcus Jordan didn’t give a specific complaint about Farmer during the meeting, but did say that at times it seems as though the Board is not moving fast enough on certain things.

“We can’t pick and choose who to help and listen to,” Jordan said.

Mayor Rossie Creel advised everyone with an issue with Farmer, or any employee of the city, to lodge a written complaint with the city so it can be investigated. He said that confirmed instances of citizen mistreatment by any city employee will not be tolerated and will be dealt with accordingly.

After that discussion, the Board approved a motion to amend the agenda to add a closed session concerning police department personnel.