After years of damaged roads, Poplarville’s blacktop to be repaired in phases 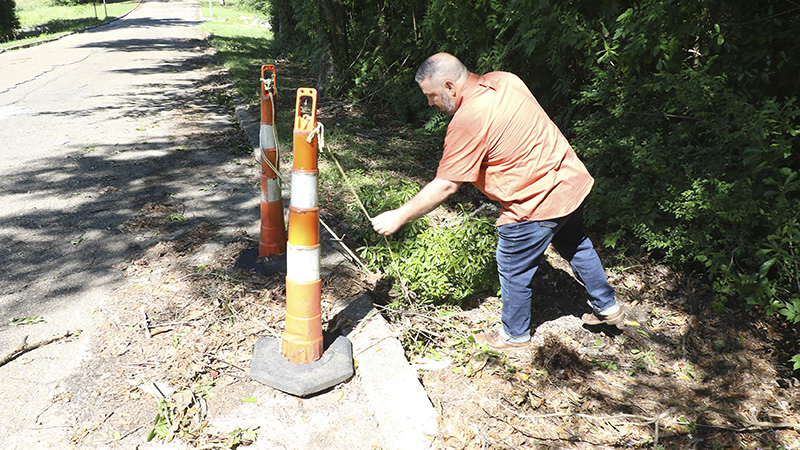 NECESSARY REPAIRS: Poplarville Mayor Rossie Creel inspects hazard cones that have been near this drainage defect on West Beers Street for years. Creel said that while West Beers is in worse shape, it is slated for repairs during phase two of the citywide project to rehabilitate city streets. Photo by Jeremy Pittari

Efforts to repair the roads in Poplarville will be completed in three phases and that work will begin soon.

As residents see work begin in the coming months, they may wonder why their road is not being repaired first.

Mayor Rossie Creel said the phases were determined in conjunction with Jason Lamb with The Walker Associates and the city’s public works director. The two men toured the city and made a list of the worst streets to be added to phase one of the project.

However, one of the worst roads in the city, West Beers Street, is not included in the first phase while two adjoining streets will be. Creel said there is a reason Pine Street and South Strahan Street will be fixed before West Beers, that’s because West Beers Street has drainage issues that need to be repaired as well.

All three phases will be paid for utilizing a $1.3 million bond, which will be retired over 12 years with gas severance tax funds, Creel said.

Within phase one, 30 sites will be repaired. Bids for the first phase of the project will be opened on April 30, and approved during the May 7, Board of Aldermen meeting. Once the bid is awarded, the contractor who receives the contract will have 150 calendar days to complete that phase.

The amount of work that will be completed in phase 3 will depend on the amount of funding remaining after completing the first two phases.

Contingent on that amount of funding, Creel said the Board would also like to construct new parking spaces at City Park on Highway 26.

City Clerk Jane O’Neal said the engineer has told the Board that it may take up to 18 months to complete all three phases.

Residents may notice that only small spots along S. McGehee Street, Roy Street and Raine Street will see repairs. Creel said that most of the surface on those streets is in good shape, however those three sites do have some issues due to unsatisfactory sewer repair work conducted in that area back in the 1990s. The city did file suit, but only received about $85,000 in compensation, said City Clerk Jane O’Neal.

Repairs to another road slated for repair in phase 1, Sonny Davis Road, will be dependent on the Board of Aldermen being able to form an interlocal agreement with the Pearl River County Board of Supervisors because half of the road is outside the municipal limits, Creel said.