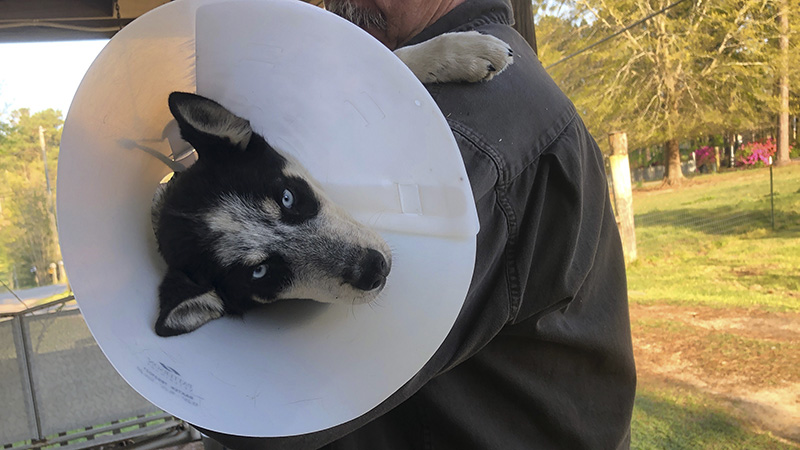 LUCKY DOG: This apparently stray dog was hit by a vehicle last week, suffering a fracture to its leg. Animal Advocates for Pearl River County is now seeking funds to help pay for the associated veterinarian bills. Submitted photo

Animal Advocates of Pearl River County and For Bullies Sake will be holding a two-day garage sale to raise money for their respective organizations.

Lauren Fitts, who is the president of Animal Advocates of Pearl River County, said funds raised as part of the effort will be split between the two groups. Animal Advocates plans to use its portion of the funds to pay off a veterinarian bill incurred after a stray dog was struck by a vehicle on Liberty Road about a week ago.

Fitts said she was alerted to the injured animal and picked it up. An examination by the veterinarian determined the 14 week-old mixed breed puppy suffered a fractured leg. Attempts to locate the dog’s owner by posting pictures on social media and lost and found websites were unsuccessful, leaving its care in the local advocacy group’s hands.

Between a veterinary visit to determine the level of injury and surgery to put pins in the dog’s leg, Fitts said that the total bill came to $1,640. A previous fundraising event brought in half of that amount, so the garage sale set for this weekend will attempt to cover the balance.

Fitts said the garage sale will be held Friday from 8 a.m. to 5 p.m.  and again on Saturday from 8 a.m. to 2 p.m. at 43 CJ Smith Road, located off of Liberty Road. Items for sale include DVDs and Blu-ray disks, women’s and junior clothing, kitchen and house ware items, shoes and some artwork.

For Bullies Sake will use its share of the proceeds to continue the organization’s efforts to provide medical treatment, preventative care and find homes for various bulldog breeds.