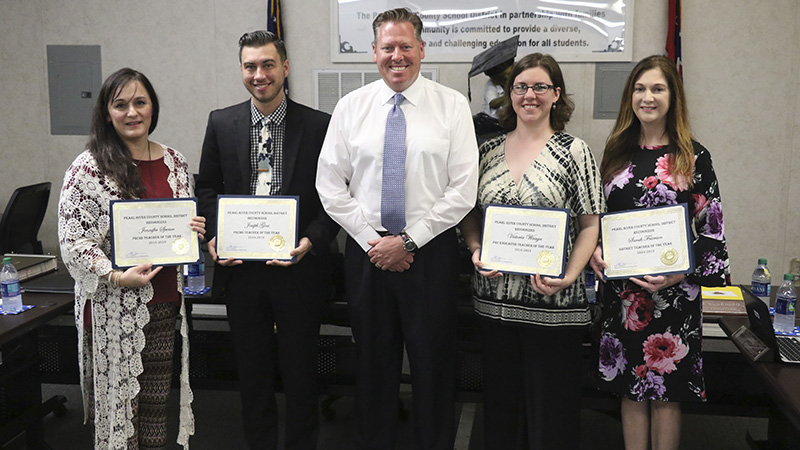 Members of the Pearl River Central Board of Trustees heard about cost increases to the work planned under a bond, and recognized the District’s Teachers of the Year during Thursday’s meeting.

Last year, voters passed a bond referendum requesting $18.5 million in ad valorem taxes that would be used to improve facilities at the District’s Carriere and McNeill campuses.

Financial Director T.J. Burleson said that with the increase in construction costs, and a number of other work added to the project, the total cost for all improvements, both necessary and needed, has ballooned to $24.8 million. The pre-bond estimates for all projects totaled $19.6 million.

The three upgrades initially proposed during the District’s pitch to convince voters to approve the referendum were for construction of 24 classrooms at the McNeill campus, a 36,500-square-foot multipurpose building with additional classrooms, a 7,178-square-foot building housing seven classrooms at the Carriere campus and renovation of the library at the Carriere campus, according to coverage back in April of 2018.

During Thursday’s Board meeting, Superintendent Alan Lumpkin said there are still three priorities, improve site drainage at the campuses, additional classrooms and the multipurpose building that will include an auditorium and classrooms for the arts department.

The various additional items added to the request will be up for debate amongst the Board. Board member Jerry Frazier asked about the additions, and if they are necessary. He expressed concern about the additional expenses, and said that part of his job is to ensure the citizen’s tax dollars are being spent wisely.

Lumpkin said the additional requests are needs, but it will be up to the Board to determine which additions, if any, are approved.

Board President Elaine Voss requested that information concerning the projects, both necessary and requested, be posted on the District’s website so the public will have access to that information. Lumpkin said it will be added soon.

Burleson said that a meeting has been planned with the architects for sometime next week to see if some of the costs can be reduced.

In other business, the Board recognized the District’s Teachers of the Year.

For more on Thursday’s meeting, see Tuesday’s edition of the Item.