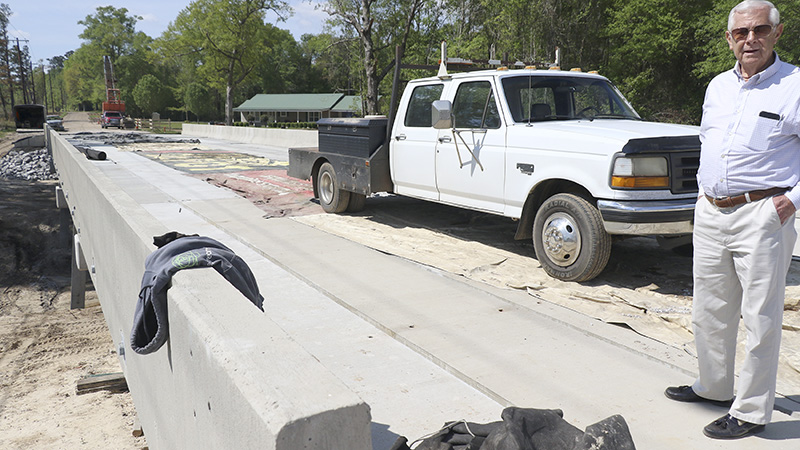 BACK ON TRACK: Work to replace this bridge on Sones Chapel Road was delayed by several weeks after unforeseen issues cropped up. Tommy Pearson of Pearl River Paving LLC, pictured, said the bridge should be open again in about three weeks. Photo by Jeremy Pittari

Efforts to repair bridges within Pearl River County are ongoing to ensure that no more roads need to be closed due to failing infrastructure.

A bridge on Sones Chapel Road is nearing completion, though some unforeseen issues delayed its construction by six weeks.

Les Dungan with Dungan Engineering said the project was necessary because the infrastructure of the previous bridge was failing. Work on the bridge began last year, but some issues with driving the concrete pilings into the substrate pushed it back. Tommy Pearson, owner of the company conducting the work, Pearl River Paving LLC, said that nine concrete pilings broke while being driven into the ground. He said the fine sand in that area was the culprit. Then, once all the pilings were in, the company that provides the concrete decks for the bridge had run out of those components. Pearson said he ordered the decks in January of this year, but did not receive the last one until March 13.

Now that all of the pilings and decks are installed, Pearson estimates it might take three weeks to conduct the rest of the work to reopen the bridge and road. Once it opens there will still be some additional items to complete, such as installation of the railing leading up to the bridge and some road striping.

Dungan said that other bridge projects are also on the way. Bids are being accepted for two more jobs. One job entails replacing a bridge over Stanfield Creek on Lakeside Drive in the Anchor Lake subdivision. That project is estimated to cost $330,000.

The second project will replace two bridges along Silver Run Road near the intersection of McNeill McHenry Road. That project is estimated to cost about $1 million to complete. Dungan said that funding for those projects will come from emergency road and bridge repair funding provided by the state recently.

Other work underway includes replacement of a bridge on Shenandoah Road, near Poplarville. Since the bridge is located on a dead end road, a temporary onsite detour had to be constructed, which is now complete. Dungan said work on the permanent bridge will begin Monday and will take about six weeks to complete, barring any unforeseen circumstances.

Work to replace a bridge on McNeill Steephollow Road is expected to take place this year as well. The road had to be closed for several days last year due to the state of the previous bridge, Dungan said. A temporary fix involved installing two tanker cars to act as large culverts in the bridge’s place, allowing the county to reopen the road. Bids to build a permanent fix in the form of a new bridge should be opened sometime next month.

While that work takes place, traffic will remain open through the use of an on-site detour. Dungan said the on-site detour is necessary due to the heavy traffic the road receives.

Of the 34 timber piling bridges left in the county, only 13 need a funding plan. Dungan said the most critical bridges are slated for replacement using available funding.

The remaining 13 are safe for low weight use, but will need to be replaced at some point in the near future.