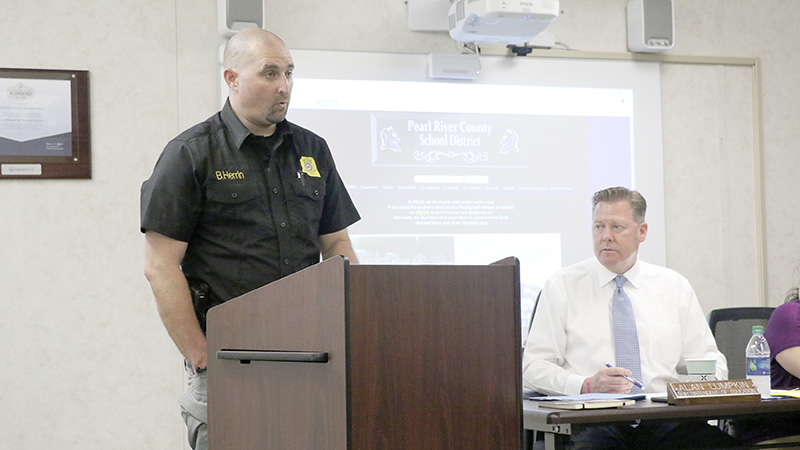 Pearl River County School District Police Chief Brandon Herrin updates the Board of Trustees about efforts to ensure the safety of the students and staff. Photo by Jeremy Pittari

There is a need for social workers at area schools, according to numbers provided by four social workers who work at campuses within the Pearl River County School District.

Statistics from the District’s social workers were provided to the Pearl River County School District Board of Trustees during Thursday’s meeting.

Denise Rouse, a social worker within the District, said that she and her coworkers spend time with students and their parents to help identify mental health issues and determine the best method to intervene.

They also work with Child Protective Services to identify children who are dealing with abuse or neglect, which is an issue within Pearl River County, said Paula Russell.

Recent statistics show that there were a total of 64 students identified as dealing with abuse or neglect within the District and were referred to CPS; 34 were elementary students, eight attended the middle school, 14 attended Pearl River Central High and three attended school at the Endeavor campus.

Nicole Stewart said that she and her fellow social workers also conduct threat assessments to identify children who may intend to cause harm to themselves or others by interviewing the staff and gathering tips voluntarily submitted by the staff and teachers.

Recent statistics show that there were a total of 63 instances where a student may have intended harm to him or her self; eight were at the elementary, 37 were at the middle school and 18 were at the high school. No cases were reported at the Endeavor campus, Stewart said.

In relation to children who may intend harm to someone else, there were 21 cases; 11 at the elementary, three at the middle school, four at the high school and four at the Endeavor campus, Stewart said.

At times students may need to be referred for psychiatric care. Kimberly Sauls said the most recent statistics show that 38 students in the District were admitted to a psychiatric hospital for treatment, of those, 10 were at the Endeavor campus, four were at the elementary campus, 8 attended middle school and the remaining 16 attended high school. Students who are admitted to a psychiatric hospital are given a diagnosis and medication. Reassessments by the social workers determine if the medication is working.

When Board members asked how those numbers compare with other districts in this county, Russell said that those numbers would be hard to come by because she is unsure if either of the other districts employ social workers, and if they do, their job duties may not include identification of potential mental health issues.

She went on to say that Pearl River County School District is unique in the state in that it employs a social worker at each campus.

“It makes me wonder what would happen if we weren’t doing this,” Russell said.

Stewart added that according to U.S. Department of Education statistics, schools that employ social workers have better attendance and graduation rates than schools without them.

The next meeting of the Board will be April 11, at 5:30 p.m. in the Boardroom at the District offices.