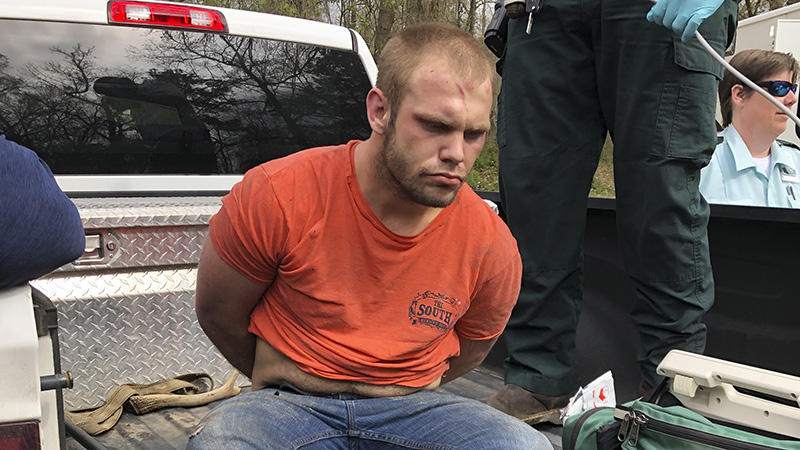 FAILED ATTEMPT: Marc Rice was captured after trying to elude law enforcement officers, taking them across state lines by swimming across the Pearl River. Submitted photo

A suspect wanted in a previous high-speed chase in November of last year where he got away, was captured Thursday morning after another high speed chase that lasted about 15 minutes and took local law enforcement agents across the Pearl River into Louisiana.

Pearl River County Sheriff David Allison said that while teams from his department, the Picayune Police Department, Mississippi Department of Corrections and the U.S. Marshals Office were picking up suspected members of the Latin King gang and conducting home inspections Thursday, one of the deputies saw a man he recognized as Marc Rice, 23, with a last known address of 13 Diamond Lane, Picayune, traveling along a country road just after 9 a.m.

Rice has been wanted by local agencies since November of last year when he took them on a high-speed chase that ended on Allen Road off of Entrekin Road where he ditched his car in a field before fleeing on foot into the woods.

Thursday, when the deputy attempted a stop on Rice’s vehicle on Burnt Bridge Road, Rice fled again down the road at speeds of up to 100 miles per hour before turning onto Koch Road, Huppo Road, Union School Road and then Charlotte Drive where his vehicle crashed into utility pole guywires.

Allison said that while Rice attempted to free his vehicle from the utility pole, the deputy fired shots into the rear tires of the vehicle in an attempt to disable it.

Rice was able to free the vehicle, and continue eluding law enforcement at low speeds, due to the damaged tires, through the residential neighborhood before tuning back onto Union School Road, then Jackson Landing Road and into the Nicholson area.

Rice then crashed into a gated field where he headed toward the East Pearl River, where he exited the vehicle, and swam across to the Louisiana side of the river, Allison said.

One deputy swam across the river after him, while two more who joined the chase got into a nearby boat to catch up with him.

Rice made it to a nearby camp, where he was cornered by the pursuing deputies. At that point Rice threw a fan at one of the pursuing deputies, but missed, before he used a chair to break out a large window in a home and enter it. Two deputies entered the home and were forced to use an electronic control device to take Rice into custody. As they attempted to detain the suspect, Rice put an unknown amount of methamphetamine in his mouth in an attempt to eat it. Allison said that deputies recovered as much of the drug as they could, but since they could not determine how much Rice had swallowed, medical personnel were called to the scene to assess his condition.

That check of his vitals led the medical personnel to determine Rice needed to go to a hospital in Slidell, La. Allison said that the St. Tammany Parish Sheriff’s Department plan to arrest Rice for breaking and entering and possession of a controlled substance.

The Sheriff’s Department already had felony warrants out for his arrest for previous violations, but intend to submit additional warrants for felony fleeing. According to previous coverage, the Picayune Police Department also has warrants out for his arrest as a result of the pursuit back in November for reckless driving, failure to yield to blue lights and sirens and felony fleeing.

Allison said that Rice had a female passenger during the pursuit, but she was not arrested.

While Rice suffered minor wounds during his attempt to flee, no bystanders were injured during the pursuit, Allison said.

The Grand, a local place to host a party