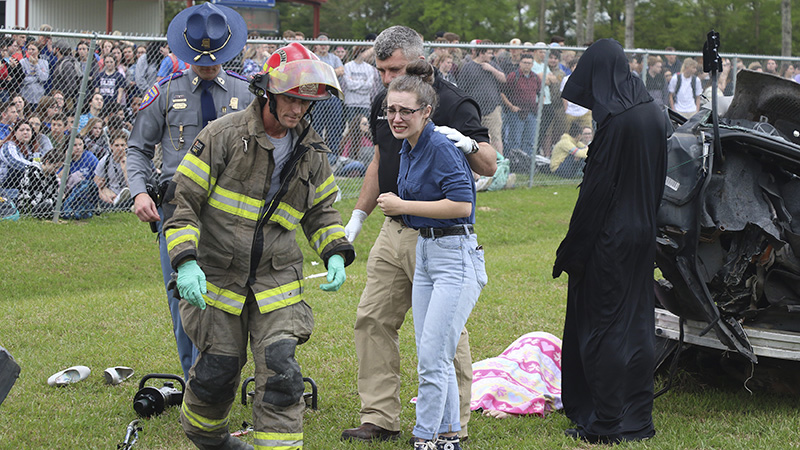 EMOTIONAL SCENE: A drama student of Pearl River Central High School reacts as she is told that her loved one has passed away during this skit held at the school just before prom in an effort to deter students from drinking and driving. Photo by Jeremy Pittari

On a windy Thursday morning, students attending all grade levels at Pearl River Central High School gathered in the front of the campus to see what can happen when people drive drunk.

Each time emergency responders conduct a skit of this nature, vehicles involved in previous accidents are typically used. But this year’s skit included a vehicle that was involved in a multicar Thanksgiving Day accident that took the lives of three people last year. It was a 2007 Saturn Ion, driven by 23-year-old Jada J. Bright, who died because of a drunk driver. Bright was on her way home from USM that day when a vehicle being driven by 48-year-old Shelly E. Rose of Asheville, NC, entered Interstate 59 in the wrong direction before colliding with Bright’s vehicle head on and then striking other vehicles. Pearl River County Coroner Derek Turnage said that Rose’s blood alcohol level was .337. Rose and 45-year-old Evans Vincent of Albertville, Ala., who was in a separate vehicle, died as a result of that accident.

Bright’s mangled vehicle was donated by her family so it could be used in programs that share the message that drinking and driving can lead to fatal results.

Thursday’s skit held at PRC came just before prom, which is set for Saturday. In the skit, members of the Blue Maskers, the school’s drama club, portrayed a drunk driver, the drunk driver’s date, mourning family members and the deceased, using Bright’s vehicle and another as props to simulate the aftermath of a fatal vehicle collision. In all, nine members of the drama club participated in some fashion, said Blue Masker Brenna Inge. She said it took most of the morning to get her makeup ready so she could portray one of the injured.

PRC Police Chief Brandon Herrin said that students ranging from freshmen to seniors witnessed the skit in an effort to drive the message home about drinking and driving. The skit included participation from Trooper Chase Elkins with the Mississippi Highway Patrol, members of the Carriere Volunteer Fire Department, AAA Ambulance Service and McDonald Funeral Home.

Carriere VFD Deputy Chief Don Mieger told the audience that in 2017, there were a total of 10,874 drunk driving related fatalities in America, of which 148 occurred in Mississippi. Of the nationwide total, 1,064 involved people younger than 21.

Within Mississippi, 21 people younger than 21 died as a result of drunk driving in this state.

After the skit, the students were asked to turn their attention to a white pickup truck behind them.

As they did, the driver used a special crane to position a wheelchair from the bed of the truck to the driver’s side door. Dwight Owens then got into the wheelchair, positioned himself in front of the students and shared his story about how he overcame an injury he suffered at the hands of a drunk driver.

In that accident, he was severely injured, suffering multiple broken bones, a severed spine and he died twice; both times medical personnel brought him back.

Other than telling the students not to drive drunk, his message to the children was to be strong and push through adversity.

He advised the children to avoid alcohol and drugs, because addictive substances can paralyze someone just like a spinal injury.

“Your value doesn’t depreciate based on someone’s inability to see your worth,” Owen said.