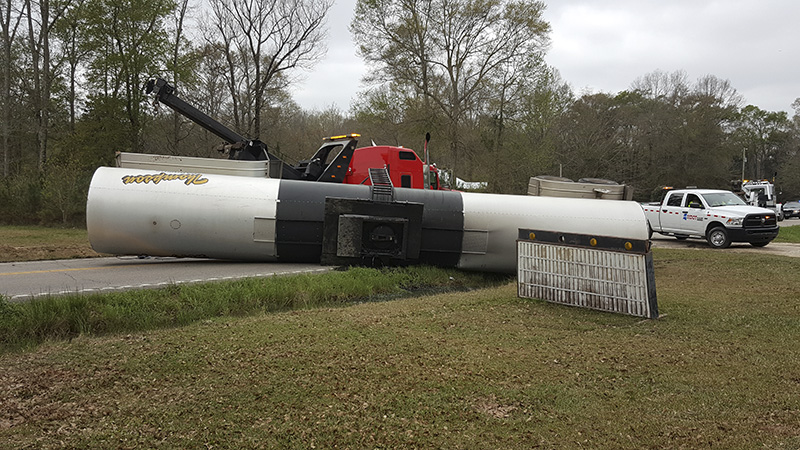 no passage: This overturned tanker blocked both lanes of travel along Highway 43 N. on Monday. It was carrying molten asphalt tack, 20 gallons of which leaked into the ditch below. Photo by Jeremy Pittari

An overturned tanker being hauled by an 18 wheeler Monday morning caused motorists traveling along Mississippi 43 North to take a detour to reach their destination for much of the day.

Pearl River County Emergency Management Director Danny Manley said the incident occurred Monday just before 6:45 a.m., when the driver of the vehicle attempted to turn around in front of a snowball stand along the highway just before Otis Stewart Road.

The wheels of the tanker fell into the ditch, causing the tanker to overturn onto its side when the fifth wheel broke. Manley said the tanker was carrying molten asphalt tack at the time of the incident, and about 20 gallons of the material spilled from the tanker into the ditch.

In the ditch, a large pool of the substance was clearly visible on top of the standing water.

Personnel from Mississippi Department of Environmental Quality were at the scene Monday.

Nick Hatten, MDEQ State On-scene Coordinator, said that by later that morning, the cold had caused the substance to solidify, so it was no longer leaking from the tanker. Specialized equipment was called to the scene to get the tanker back on its wheels without causing more leakage. Manley said a rotator crane was en route just before noon Monday. He expected the road to remain closed most of the day due to the complex nature of righting the tanker without damaging it and causing more leakage.

No other vehicles were involved and no major injuries were reported as a result of the incident, Manley said.